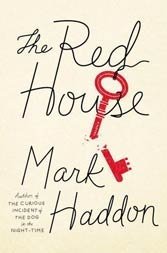 Mark Haddon’s examination of two families and their secrets is an often-dreamlike excursion into human dynamics. Forty-something married couple Angela and Dominic, mid-teens children Alec and Daisy, and eight-year-old Benjy head for a Welsh border vacation rental — “The Red House, a Romano-British farmstead” — where they will stay for a week with Angela’s brother Richard, his second wife Louisa, and her teenaged daughter Melissa.

Both couples are middle class extremists, their pursuits and dilemmas borderline caricatures. Among the adults, jazz/rock-loving Dominic is having an affair; Angela is haunted by a long-ago stillborn child; carnal Louisa and laconic Richard, a radiologist, struggle to find their marital equilibrium. Among the young, Daily reckons with faith and sexual orientation; Melissa possesses malicious secrets, luring in Alex; Benjy worries constantly about death. Overlaying this, brother and sister Richard and Angela are haunted by divisive parental memories neither one fully remembers (“They had spent twenty years avoiding one another and [Richard] couldn’t remember why.”)

The house they share provides narrative lubricant for catharsis, awakening, and comeuppance. Lies, white and whole, are exposed. Doubting adults are resized or reassured; children are ushered closer to an adult world that seems claustrophobic, alienating, unwilling to bend to their whims. For Daisy, the most confused but shaman-like of the lot, life is about “finding the strength to bear the discomfort that came with being in the world.”

Haddon isn’t aiming for the transcendent. Aromatic prose goes hand-in-hand with broken washing machines. He doles out equal compassion to each repressed family member, giving the novel a song-song balance. But the repression has a passion of its own, a paradox that’s the lifeblood of the novel. Haddon is less interested in solution or revelation than making clear that families are a tangle of weird wiring, which his lyric snapshot makes compulsively clear.