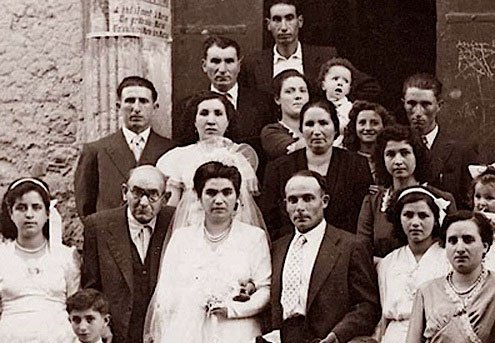 A southern wedding party, circa 1925. “I could never understand why my Italian friends made such a sour face…”
W

hen I first came to live in Italy I longed to be invited to a real Italian wedding. I had visions of long tables decked out with flowers somewhere on a lawn, with musicians playing, children laughing, and everyone dancing as the wine flowed freely.

Just like something out of “The Godfather,” really. So I could never understand why my Italian friends made such a sour face whenever an invitation arrived for them, and started making all sorts of excuses so they could get out of it. I would have given anything to take their place. I finally learned the sad truth when I got the magic summons to attend the wedding of my then-boyfriend, now- husband’s cousin down in Naples.

The first shock came when I discovered that there would be no outdoor setting. Even though the weather was glorious, we were all directed into a sepulchral dining hall where we were to remain for the next — wait for it — seven hours. The only possible escape was the occasional trip to the bathroom. Not one to have my dreams shattered lightly, I looked around enthusiastically so I could drink in the festive scene. I was mildly disappointed to see that there were no long tables but lots of little ones, and we had been assigned to the company of a bored-looking middle aged couple and a trio of aunts. Bizarrely I thought, the happy couple had been plunked on their own little table where everyone could stare at them as they ate, and where they couldn’t talk to anyone.

Not that they had much time for either, for they spent most of the proceedings being ushered around the room and maneuvered into various poses by the director of the crew making the wedding video, whose word was law. I should imagine that the bride will in any case have problems recognizing herself as she watches the film in years to come. Her face had been so thickly plastered with makeup that she had trouble smiling, and her hair had been swept up onto her head in coils and swirls in a style reminiscent of Dusty Springfield.

The bride’s decidedly flamboyant attire was in marked contrast to that of the rest of the guests, who were all looking decidedly somber. For a moment, I did a double take. Had I made a hideous mistake and come to a funeral? Just about everyone was dressed in black (so chic, I was told afterwards when I politely enquired about the dress code). As the afternoon wore on, the guests — rather ungratefully I thought — sighed as each new dish arrived. After the third meat course, most people hardly touched their food, but pushed it round their plates looking fed up. No music, no dancing and no laughing children, as bambini, the invitation had warned sternly, were non graditi.

I remember feeling rather sorry for the couple as everyone at last moved off, looking shattered and slightly disgruntled. After all, the bride and groom had spent a fortune on their big day, and, like many Italian couples, had waited ages to get married so they could save up for the whopping wedding bill. Over here, you can’t get away with laying on a dish of tired-looking canapés and serving a few glasses of sparkling wine the way you can where I come from.

But what I hadn’t quite realized was the horrific expense that the day entailed for the guests — which goes a long way towards explaining all those glum faces.

As it was patiently explained to me afterwards, an unwritten but widely acknowledged rule dictates that guests make a mental calculation of the cost of their place at the wedding. They must then multiply that sum by the number of people in their party to find how much they need to spend on the present. Add onto that the cost of a new outfit for all the women and most of the men, a hotel if you don’t live close by, and you can say goodbye to a serious wad of cash.

We’ve just been invited to another wedding. It’s in Naples again, and I’d like to say that I’m looking forward to it, as this is one of my favorite cousins and I really do wish him and his new bride well. It’s just that I’ve got absolutely nothing to wear, nor has my husband or any of our three children, who, unfortunately, are graditi on this occasion. There are five of us, which means the present will cost us a bomb, and there’s no room for us to stay anywhere so we’ll have to sleep in a hotel. But the unkindest cut of all is that this cousin has waited to have a child before tying the knot, so the wedding will also be a christening — a double whammy for all us lucky guests!