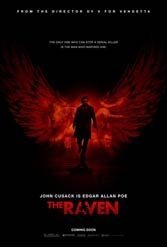 In this mediocre historical thriller directed John McTeigue of “V For Vedetta” fame, a serial killer on the prowl in mid-19th-century Baltimore commits crimes that take a slice from the details of Edgar Allan Poe stories. Poe himself (John Cusack), initially a suspect, works with police inspector Emmett Fields (Luke Evans) to help solve the lurid murders. As the crimes unfold, so does a theory on how the 40-year-old Poe might have met his death in 1849, as mysterious then as it is now.

The action starts poorly, with Poe on a bender. Worse, Cusack’s choppy delivery may annoy viewers as much as it does the working class bar patrons he taunts. Orphan Poe was notoriously rebellious (expelled from West Point), moody, and self-destructive. The introduction of his love interest, Emily Hamilton (Alice Eve), does little to ignite screen chemistry.

Mostly, Poe lodges with his pet raven in an effort to help Fields predict the killer’s next moves, which at least adds a dollop of suspense to the costume drama. There’s plenty of melancholy, nocturnal streets, and gore, but not much more.