The raging down below 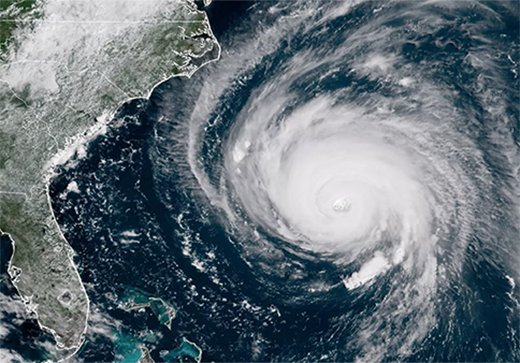 urricanes are the stars of America’s mean season, implacably brutal knuckles of howl that turn summer into fall and rearrange human landscapes at will. Their now-measurable force has long thrilled and frightened those who track their progress and set off mass media alarm bells ostensibly aimed at scaring the reluctant into seeking shelter.

The mean season has its annual arc and includes a handful of named storms that scale the alphabet, Florence to Maria to Michael, each storm’s ferociousness meticulously ranked in football team fashion.

Rarely though has the American South’s brute hurricane season seemed so comparably kin to the mood of state.

As damaged as Florida or the Carolinas, though differently, is Washington, where partisan lawmakers just trudged through carnage of in an ugly month-long battle over the character of a now sworn-in Supreme Court justice.

Devastated homes can’t be compared to ruined decorum, but the Supreme Court faceoff was a Force 5 tussle in more than metaphorical terms. The partisan antipathy was fueled and overseen by a blunt-force president whose behavior continues to give Washington an unnecessarily contaminated feel. Whether generated by politicians or citizens run amok, humiliation has rarely seemed so much like a parlor-game staple of discourse.

America’s capital hasn’t felt so tarred since the “Better Dead Than Red” 1950s — an era in which former Allied general and President Dwight Eisenhower was content to let his deputy, Vice President Richard Nixon, play attack dog. Parties blame each other in terms usually associated with irreversible blood feuds. The vendetta-styled feel of today’s acrimony seems at times to suggest an underlying urge to set aside rhetoric and take to real fighting if necessary, as if the country, 150 years after civil war, was again in the market for a self-made tempest. Historically, such strife brings winners, loser, remorse, contrition, and elicits a desire to unify and rebuild as part of a national healing process.

But there can be no such civil war. Enlightened values and affluence forbid it, with the ebb and flow of consumerism ensuring the angry half-peace that is the 21st century’s status quo.

America’s capital hasn’t felt so stuck in the mud of disdain since the Better Dead Than Red 1950s, with parties blaming each other in terms usually associated with blood feuds sure to end badly.

Instead of scheming civil war, stormy humans unleash surrogate torrents of bitterness while gearing up for Congressional and Senate elections in November before the 2020 presidential contest, which promises further snarling all around.

Unlike any of his predecessors, this president is impetuous in ways that make him impossible to track. He blows hot and cold well outside convention, nor does he belong to any party but his table for one. Some of his adversaries now imitate his raging, making resentment into a proof-of-presence skill. The middle ground is passé.

Then again, ask a hurricane for a middle ground, or lenience, and all you’ll get is blown away. So it is among this period’s elected operatives. Most are primed to insult because their hardened online constituencies are drawn to the flame only by outrageous behavior.

This reality has changed the pitch and tone of political and cultural life. Wounded is the undercurrent of hopeful optimism that once flourished no matter who sat on White House cushions. It’s time to forget about Jimmy Stewart, the Mr. Smith who thanks to Frank Capra journeyed Washington as a neophyte senator who upheld Hollywood’s early idealism by preaching decency, honesty and kind rigor. A Mr. Smith of this age would likely be pressed into identifying his dislikes and acquiring the rudest available hash-tag before attempting to make waves. “I blame therefore I am,” Descartes did not say, but might have.

So blame the sitting president, a foul oracle of self who sells the elixir of contempt and carelessly mocks complex thinking to devoted supporters gratified just to hear the word greatness. Or blame an outrage-happy era that has sacrificed political civility on the falsifying altar of mob gratification billed as new-age populism but closer in spirit to a righteously unreconstituted village rule that nourishes itself on the allure of revivalism, read “greatness,”and gleans conspiracy theories from a worldwide web whose half-truths are hawked with the zeal of a patent medicine salesmen braying from the backs of 19th-century wagons. Who cares what’s in the potion if their flaxen-haired peddler thunders on cue?

Blame hurricanes, which from July to November show what happens when hot air collides with cold while vying for the same stretch of stratosphere, one inimical to the other, those located beneath this quarrel reaping the literal whirlwind of a failed coexistence.

If only the random chaos above wasn’t coming to match the contrived fury below, making all that’s storm-tossed the norm.