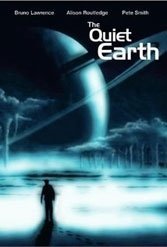 Made at the height of tensions between the anti-nuke New Zealand government of David Lange and Ronald Reagan’s Evil Empire-obsessed United States, director Geoff Murphy’s sci-fi drama is a B movie with A+ ideas.

Research scientist Zach Hobson (Bruno Lawrence) wakes up one morning to find a world devoid of humans. Before that, he’d worked for Project Flashlight, a U.S. sponsored energy grid scheme that he comes to believe malfunctioned, causing a catastrophic “effect.” (“We trusted them. They were on our side.”)

Intoxicated with survivor’s guilt and freed from decorum, he plays sax in fully intact streets, wears a negligee on a rugby pitch, and introduces himself as president of the world to cardboard figures, a poignant sequence that cuts to the quick of human significance. But suddenly he’s not alone. Enter Joanne (Alison Routledge), another survivor: Eve to his Adam. Just as a hackneyed love affair sets in, Murphy deals yet another card: a third survivor, a tough Maori named Api (Peter Smith), whose presence creates a nervous love triangle. “I get the feeling we’re dead or in a different universe,” says Zack, nagged by hints that the troika may have been less than strangers in the “real” world.

Murphy raises more questions than answers and closes out with unpolished ambiguity. But it is all strangely hypnotic. This is Kiwi-style “Mad Max,” but with the mystifying taking precedence over nihilism. Lawrence is perfect as a man half-amused by a purgatory he tries laughing off but can’t. Murphy’s assistant was Lee Tamahori, later responsible for “Once Were Warriors.”