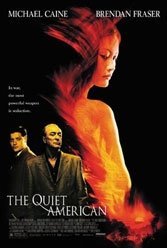 British novelist Graham Greene was no fan of American exceptionalism. A spy during World War II and a reporter in hard-knocks French-run Southeast Asia after it, he preferred reflections on duplicity to the broadcasting of unfounded idealism. “The Quiet American,” written in 1955, merges the themes.

Its second filming (the first was Joseph L. Mankiewicz’s 1958 Cold War version) gives director Phillip Noyce the pleasant task of casting Michael Caine as Thomas Fowler, an aging, know-it-all British journalist who lives in Saigon with his 20-year-old lover Phuong (Do Thi Hai Yen). Fowler doesn’t believe in much of anything, let of all honorable motives, but he’s comfortably smug with his adopted lifestyle. Enter Alden Pyle (Brendan Fraser), a young American aid worker who believes colonialism and local tradition are ripe for merging, and doesn’t hesitate to give Fowler his take after young buck and old cynic meet accidentally in a Saigon hotel. Naturally, Pyle is no fan of Fowler’s interpretation of marriage, particularly as he begins to fall for Phuong.

Caine is a crotchety majesty as Fowler, and Fraser an adequate if occasionally nattering foil as the conniving Pyle. Caine has always been at his best in system-hating, loose cannon roles (including his cockney debut as a spy in “The Ipcress File”). As he and Pyle grow improbably closer, Caine ably adds humanity to Fowler’s mix, particularly when Phuong “defects” to Pyle. As shifting loyalties begin sour along with the relationship between the two men, Fowler finally awakens to the threat Pyle poses, and takes matters into his own hands.

Noyce lets the action ascend slowly and assuredly, but the narrative is squarely in Caine’s hands. He responds credibly, wonderfully, in a performance worthy of a stage play. Only closeout scenes connecting 1950s Vietnam with the later American military presence seem gratuitous.