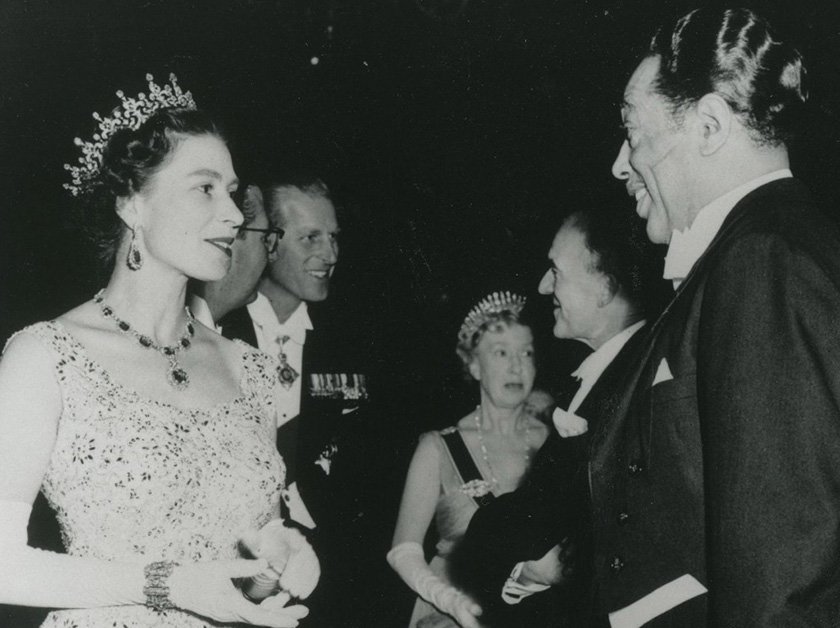 One legend meets another.
I

n 1958, Queen Elizabeth II and jazz legend Duke Ellington met for the first time at an arts festival in Yorkshire. The following is an imagined version of a later encounter between the two at Buckingham Palace four years later, in 1962.

A queen – the Queen of England – sat primly and properly across from a man of a different skin color who was like royalty to her.

His brown face was oval and moved by subdued liveliness. With his heavyset but lithe figure, he resembled a chess piece with a smile behind his eyes. On a chess board, mused the Queen, there was a pawn, a king, a knight, but no duke. Yet, this was precisely what he was called, by himself and by music lovers around the world.

“I do hope you realize just how long I’ve wanted to meet you,” she began. Etiquette dictated that she was always first to start a conversation.

“Your Majesty, we met not so long ago. You recall in Yorkshire? Vera Lynn was there as well.”

The two names, Ellington and Elizabeth, hearkened to something other than the past. Ellington, Elizabeth, Elevation.

“Yes,” said the Queen, recalling the presence of the singer who had soothed British soldiers’ hearts during the war. “But I mean really speak to you.”

“I’m flattered, Your Majesty. The only words I can respond with are the pleasure is all mine.” It was in fact he who had flattered her at their first encounter by subtly commenting on her youthfulness, the Queen recalled.

Duke looked around briefly. “And, please be assured, I speak just as much on behalf of the orchestra as I do for myself.”

“That is noble of you,” the Queen smiled. Two smiles, her fleeting one, and his wide one, met over the glass coffee table. She rapidly sorted through fragments of her past experiences, and noticed how relevant the real name of Duke Ellington actually was to her.

Edward had been his first name. This was not short of complex associations for Elizabeth, who had seen wrath brought upon her uncle, Edward VIII, upon his abdication, and anguish cast on her father, George VI, when he succeeded to the throne.

Kennedy had been his middle name, and in this year of 1962, few names resonated as dynamically as this one. Elizabeth had made the acquaintance of John and Jackie, the model presidential couple for the Western world, the year before.

However, the two names, Ellington and Elizabeth, hearkened to something other than the past. Ellington, Elizabeth, Elevation. She lifted her eyes, embarrassed by her momentary absence.

“If you don’t mind, Your Highness, you seem preoccupied,” Duke said.

“To be truthful, I am,” she answered. “You see, my mind is trying to grapple with the fact that the man who recorded Take the A Train – the sound of my sister, my growing-up, my youth – is so near.”

Duke’s grin had more watts than any lightbulb powering the Palace.

“Your words mean a great deal to me. Although, in fairness,” he continued, “I didn’t compose that piece, it was my close friend, Billy Strayhorn.”

“I’m familiar with that name,” Elizabeth replied. “If only by your music.”

Duke sighed. “I wish more people were familiar with his name. People hear pieces they think they know and assume I was the great made who penned them. You know Satin Doll or Chelsea Bridge?”

“Both of them, naturally.”

“They were composed by Billy. True, we collaborated, but…would you allow me to bring in politics slightly?”

Elizabeth hesitated. Political matters were generally sensitive with people within her entourage. Even more so with people outside of it. Yet she agreed.

“You’re familiar with the struggles of my people?”

The Queen nodded. A sovereign who was either blind or deaf to the outside world was pointless.

“You see,” the musician pursued, “it’s not uncommon for somebody who is white,” he insisted lightly on the word, “to take something written by a Negro – book, music, opera, whatever, and claim it is as their own, and receive recognition for it.”

“Matters must grow more complex than that, surely,” the Queen pointed out. “For a person of your stature.”

“You’re right,” Duke agreed. He turned his head upwards, as if invoking a spirit to speak on his behalf. Much like before beginning a concert, Elizabeth reflected. “Where it gets more delicate is when you’ve become admired by people of all colors and castes. What people know you best for is hardly ever yours alone. Music that I’ve made is the result of collaboration with a composer, such as Billy, who gets little recognition.”

“I didn’t expect Duke Ellington to hide his light under a bushel,” the Queen commented.

“And I don’t, Your Majesty. What I mean is that when I write pieces like Sophisticated Lady, they’re about characters. That particular piece is about young women in Harlem in the 1920s. Because I wrote it about them, I wrote it with them. Through my music, I formed a silent contract with them.”

“Similar to the monarchy,” Elizabeth suggested. “Or a Republic such as America or France. A leader has formed a moral contract with their people.”

“Which is easier to see,” Duke said. “I wish that someday, though, those who listen to my music will understand the contract I made with my people and their stories. There are so many, but all that is seen is a bandleader.”

“Many of the same attributes are given to a ruling monarch and to a bandleader, I shouldn’t wonder,” the Queen murmured. “You are deserving of it, of course. Many others aren’t.”

“Your Majesty, let me suggest something that could alter your viewpoint slightly. You speak of monarch and bandleader as if they were two distinct things. They’re not! Think of it. From where we stand, we try to stay true to ourselves in the most stable way possible, while keeping the unity of an orchestra in balance. Making sure that behind and in front of you, everybody is playing the right part. For the world, make no mistake, is a big band. Some parts of it more harmonious than others, I’ve found.”

“And if the bandleader feels ill at ease in his – or her – own image as bandleader?” she was compelled to ask.

For the world, make no mistake, is a big band. Some parts of it more harmonious than others, I’ve found.

“Then that is precisely the sign of a good bandleader. Have you read Descartes?”

Elizabeth nodded hesitantly. Philosophy had been a part of her educational program when she had had sessions with a private tutor.

“He believed that doubting ourselves is the only sign of our existence,” Duke explained.

“I’m not sure that I share his point of view,” the Queen answered.

“Frankly, I don’t either. But doubt is real. And the challenge is to see it, witness it, understand it in the faces of your people, when you can never show it yourself. A person in your position can’t be doubtful of themselves, or of God, or of the people they lead, no matter how often it comes.”

“You speak with the eloquence of experience.”

“Oh, I face the challenge,” Duke admitted. “But not to your extent.”

“Comparison’s no good.” The Queen smiled. “I have little financial obligation towards the population. Towards your band, you do.”

“Indeed,” Duke chuckled. “At times I feel my financial obligation to my musicians is the only thing that’s kept my orchestra together for so long!”

At this, they both laughed, and Duke was struck by the inner musicality of the Queen.

The first encounter between the Queen and Duke Ellington sparked Duke’s creation of “The Queen’s Suite,” a twenty-minute musical work honoring the Queen which he composed after their first meeting. A single pressing of it was made, and sent to her. It remained unreleased during Ellington’s lifetime. In 1976, two years after his death, the posthumously released album won a Grammy.

Given royal etiquette, it is difficult to say whether Duke left the Queen with his custom of planting two kisses on each cheek.