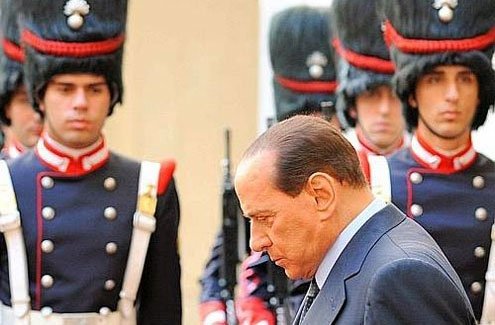 The master of his own drama.
M

y printer is a stubbornly sentimental middle-aged Communist. He sobbed when his big dog died and dutifully calls me whenever Silvio Berlusconi hits a rough patch. The latest call came after Italy’s constitutional court struck down an executive immunity law that the Berlusconi government had drafted. Even British newspapers were demanding that Berlusconi resign, he told me. “From time to time we see little justice.”

The justice he has in mind is unlikely.

Hoopla aside, Berlusconi’s chronic narcissism is old news. He’s an insufferable self-aggrandizer with a tenor’s DNA. Soon after the high court ruling, he spewed familiar vitriol: Italy’s judges are Communists; his enemies are out to get him (including the octogenarian president, a former school tie Communist); legions of “people” support him; he’s benighted but determined; plotters are everywhere but his greatness will prevail.

Third-person arrogance — “me” broadcast as “we” — is methodical and highly contrived. “To attack is the best form of defense” goes a Napoleonic saying. In this, Berlusconi is a master. He makes all political, legal and legislative warfare into a choreographed, take-it-or-leave-it last stand in which he plays the part of the besieged but heroically brilliant general. Yet underneath the theatrical vanity is a battle-plan meant to dampen the development of an issue-oriented opposition.

The results of the elections that returned Berlusconi to power two years ago essentially extinguished any party or group of parties able to fill Italy’s contentious political breach (unlike Greece, say, where Socialists recently muscled their way back). Smaller leftist parties vanished, leaving only the unconvincing Democratic Party, which has yet to find either an identity or a persuasive leader, like a restaurant that lacks a good chef because it has no sustainable cuisine.

The opposition’s downfall stemmed from trying to suppress Berlusconi, giving that goal outsized importance. Such “affirmative resentment” rewarded Romano Prodi with a narrow victory in 2006, but one that proved hopeless. The victory’s makers were united only in their dislikes. Once the chef was expelled, the kitchen hands turned knives on one another.

The new conservative alliance (this time more disagreeably dependent on Northern League support) quickly repopulated state institutions, television in particular, with die-hard loyalists. Only members of the judiciary, the last of the official hecklers, held out.

An emboldened Berlusconi then widened his conceit by testing the outer limits of egregiousness. Allegations of sexual impropriety (including even a teenaged girl) magnified rumors that something had to give. Top of the agenda was the warred-over immunity law, a blatantly me-first piece of legislation passed last year.

Its axing — which even Berlusconi himself foresaw earlier in the year — produced his latest shrillness. But yet again the debate focused only on him, ironically neutralizing the prospect of his forced displacement. His allies are by now familiar with (if not accepting of) the martyr maneuver. It’s grossly central to his makeup.

They also know that the previous executive immunity concoction, a Berlusconi law passed June 2003, was also struck down by high court a year after its approval. The hue and cry was loud until it passed.

You can’t shame the shameless, who only love themselves more. For some of non-intellectual Italy, the shambling judiciary is part of what ails a country already politicized beyond Anglo-Saxon comprehension. Don’t be fooled by blogger Beppe Grillo. He preaches to the choir in the same way anti-George W. Bush Democrats futilely howled for fixes in 2004, eventually promising to flee to Canada. They didn’t. Among the governing allies, Gianfranco Fini, the Fascist-turned-moderate, lacks both charisma and wiggle room. Meanwhile, Northern League chief Umberto Bossi survives (and profits) through Rome-bashing.

Welcome then to Italy’s culture wars: The are loud, vulgar, and pseudo-ideological. They’re lifted straight from the U.S. red state-blue state playbook and nourished by insult and character assassination in the vein of the U.S. right’s recently repellant criticism of President Barack Obama. Nastiness is the norm.

What makes Italian nastiness particularly deplorable is the suffering state of the nation, which a populist like Berlusconi can still prey upon and skillfully manipulate. The effort spent by judicial (and media) enemies to bring him down comes, he roars, at suffering taxpayer expense. It is these suffering taxpayers, he insists, who will fuel his revenge. We’ll see.

Meantime, good news is hard to find. The Italian economy remains ice cold and the prospect of snap-elections inappropriate, given the lack of choice. A think-tank created by former industry association chief Luca di Montezemolo recently released a report (its first) that began with an ominous preamble: “Italy is a stalled nation…”

Forty percent of the Baby Boom children of lawyers, architects, and pharmacists were shadows of their parents, namely lawyers, architects and pharmacists. This as children of working class parents struggled to make their way up the social ladder. In addition, more than a fifth of Italy’s youth (ages of 18 and 24) had decided to ignore or walk away from advanced schooling, a figure that is nearly 10 percent higher than the European Union norm. Most stayed home. Leadership role models were no help.

“Can we please finally get beyond this pathologically endless political repetition,” begged Montezemolo, an enduring critic of government red tape who also happens to be a millionaire aristocrat and the chairman of Fiat.