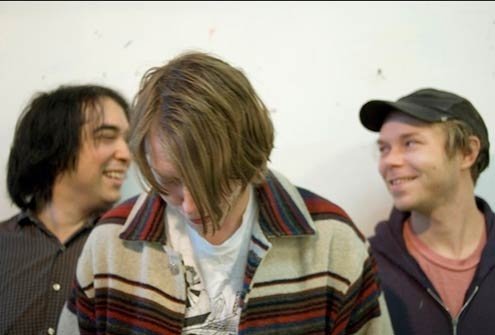 Black Dice formed in the spring of 1997. The band is now Bjorn Copeland, Eric Copeland and Aaron Warren.
I

The band formed from friends in the art scene surrounding the Rhode Island School of Design in the late 1990s and quickly became known for intensely aggressive songs and physically abusive live shows. Concerts started as 15-minute hardcore incinerations, but as time passed the band became interested less in the songs themselves and more in the transitions between them. Show lengths increased, as did volume.

In 2002, they jumped the hardcore shark and released Beaches & Canyons, five flowing songs that united their roots with psychedelia, industrial, ambient and shoegaze. It’s the most acclaimed thing they’ve done, but from the band’s perspective, it was just another step in an ongoing creative process.

My first impression of them was one of hatred. That was during the summer of 2004. I had a radio show and would play the Miles of Smiles EP regularly just to pass the time. Both songs were 13+ minutes. I wasn’t into that week’s show, I’d pop in Miles of Smiles and let the title track and “Trip Dude Delay” play out. At 27 minutes, that was the entirety of a set. I played it often because it was deliberately weird, but I didn’t like it because it wasn’t noisy enough — everything I’d been told about this band I didn’t hear on Miles of Smiles. What I did hear was aimless noodling, meaningless electronic squiggles, formless nothingness.

It was only later that I realized those seemingly innocuous sonic collages were stopgaps, snapshots of the band at their creative peak. Creature Comforts also came out that year and was the end of their middle period. I ignored it.

With 2007’s Load Blown, I had it. They were originally signed to the DFA in ’02 because label co-owner James Murphy (also of LCD Soundsystem) saw in Black Dice a band trying to make a strange kind of pop music. Ironically, they sounded most “pop” only after their DFA contract was up. 2005’s Broken Ear Record hinted at this, but Load Blown‘s hooks and choruses are clearly there despite the typical disorientation. 2009’s Repo is similar.

Now, three years later, comes another left turn. What is Black Dice trying to achieve with Mr. Impossible? It has the hallmarks of late period ‘Dice on a first pass, heavily manipulated vocals and distorted beats, but there is also something more.

Opener “Mr. Impossible” suggests the band has delved heavily into drum n’ bass music. “The Jacker” sounds like chillwave gone horribly awry. “Carnitas” plays on Ariel Pink’s early bedroom pop experiments with one of its own. “Brunswick Sludge (Meets Front Range Tripper)” is like an early 90s New Jack Swing beat attacked by the glitch-obsessed IDM crowd. There’s a serious strain of funk running through the entirety of the album.

The trio has created a musical lexicon entirely apart from other artists and they’re continuing to speak in that distinct language. Picking out influences or sounds you think you recognize or parts of melodies you’re certain belong to someone else speaks to the very heart of what Black Dice has always been — and always will be — about.

Mr. Impossible isn’t about achieving anything, then. It is about processing, always about processing. It’s about continuing a 15-year journey with no clear endpoint, ambitions limited only by what our ears can tolerate. It’s all over the place, which is to say, it never moves. It always surprises me to say this, but here I am again with miles of smiles plastered across my face: Black Dice is as good as the day they started.