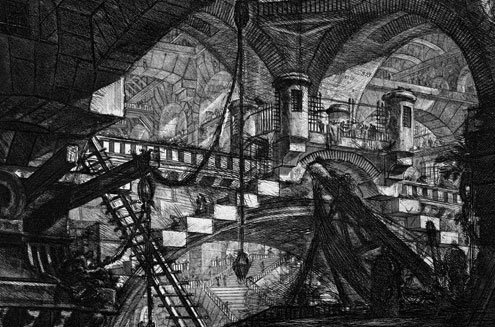 Piranesi's surreal vision of prisons was incomparably bleak, and highly unpopular in his lifetime.
G

iovanni Battista Piranesi’s revolutionary “Prisons” has influenced generations of artists, from Romantics to Surrealists. Yet the nightmarish series of etchings was widely overlooked during the artist’s lifetime. Too innovative for staid 18th-century tastes — epitomized by Piranesi’s Vedute, romanticized renderings of Rome’s picturesque ruins and edifices — “Prisons” won widespread attention only after his death in 1778. Luminaries who fell under their spell included Edgar Allan Poe, Henri de Balzac, Marcel Proust, J.M.W. Turner, and Victor Hugo, who became obsessed with the “horrifying Babels Piranesi dreamed of,” incorporating their spirit into his work.

Among the most influential etchers in history, Piranesi was a true eclectic. In addition to his artistic work, he was an architect, an archaeologist, a restorer and an antiquities dealer. In 1740, at age 20, he moved to Rome from the Veneto. His Vedute di Roma established his artistic name. He then began a series of monumental etchings (there would be 135 in all) in which he outlined a subterranean dreamscape, the Carceri d’Invenzione, or “Imaginary Prisons.” Prisons at the time were primitive, and Piranasi sought to capture their otherworldly bleakness. “Genius shows itself at work for the first time,” wrote acclaimed French novelist Marguerite Yourcenar in her incisive essay, “The Dark Brain of Piranesi.”

Using his acquired mastery of perspective, light and architectural form, Piranesi transformed Rome’s palatial interiors into a shadow-world of claustrophobic chambers rife with thick chains, ornamented windowless dungeons, and staircases and bridges leading to an infinite nowhere. Massive arches and blocks of stone dwarfed human figures in labyrinthine networks. All around were fires and a ghastly menagerie of torture devices: gallows, stakes, cables, rope, a rack and a bone-crushing Catherine wheel.

For “Brave New World” author Aldus Huxley, these “metaphysical prisons” represented “magnificence without meaning” and “incomprehensible misery without end and beyond the power of man to understand or bear.”

How did “Prisons” come to be? In his 1821 memoir “Confessions of an English Opium-Eater,” essayist Thomas De Quincy insinuated that Piranesi composed the plates while under the influence of malarial fever. Piranesi worked on the series, originally titled Invenzione capric di carceri (“The Capricious Invention of Prisons”), in Venice, while taking a break from Rome.

Feverish or not, Piranesi’s etchings were hardly arbitrary hallucinations. Instead, they were deliberately contrived if deeply inspired architectural creations that belonged to the Venetian tradition of the capriccio. These were embellished architectural fantasies set in dream-like atmospheres favored by two of the last Venetian masters, Tiepolo and Canaletto. Tiepolo, whose Capricci etchings had met with great praise, received many visits from Piranesi.

But it was Rome that ensorcelled Piranesi. “Prisons” exploited the city’s architecture and artifacts in an attempt, wrote Yourcenar, to “transpose the substance of Rome into the realm of the irrational.” The penitentiary theme was redolent of Piranesi’s training as a set designer. Prison scenes were prevalent in the theatrical world, and Piranesi closely followed the set design work of the renowned the Bibbiena family and the Valeriani brothers.

For an aspiring architect, “Prisons” also represented an experiment in architectural composition, with attention to dimension and form. (Piranesi’s only completed architectural project was the 1764-66 restoration of Rome’s Church of Santa Maria del Priorato).

In the introduction to the “Serpent and the Stylus,” a 2006 collection of critical essays on Piranesi’s work, the architectural reveries contained in “Prisons” are praised as innovative. “Each plate represents a powerful architectural experience itself whereby the entire Renaissance system of pictorial space is questioned with a degree of daring unparalleled before Cubism.”

After his prolific stay in Venice, Piranesi returned to Rome and in 1745 offered a limited number of the prison prints for sale at his studio on the Strada Felice, now Via Sistina. They didn’t sell. He nonetheless returned to “Prisons” in 1761, at the height of his fame, reworking the plates. The word capric was excised from the title, and the images were numbered. Two new plates, II and V, were included, and instruments of torture introduced. Piranesi intensified the chiaroscuro, aggressively darkening once-lighted space. He also increased the implacable magnitude of the architecture.

The sinister overhaul was influenced by Rembrandt and in concert with the Gothic novel trend. It came as Piranesi sought to distance himself from the once-preferred architectural ideas of the French Academy in Rome. Returning to “Prisons” afforded him a creative release.

Eighteenth century artists were expected to produce easily understood available to public discourse. But Piranesi instead chose a sublime and subversive direction, heralding a critical cultural shift that hinted at the obscure side of psychological truths. “Prisons” addressed notions of vastness, infinity, magnitude and deprivation that Edmund Burke’s 1757 “Enquiry into the Origin of Our Ideas of the Sublime and Beautiful” later adduced.

“That which Piranesi represents,” wrote Huxley with definitive ardor, “is not subject to historical change.”