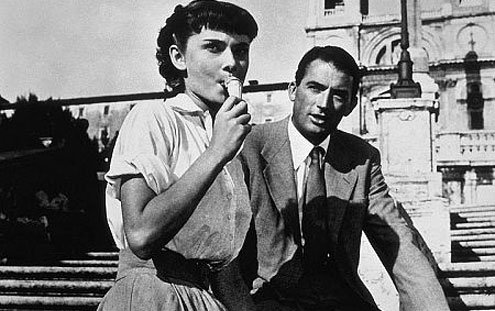 ovies show a lot of unbelievable things: talking frogs, light saber battles, zombies and vampires. But getting by in modern Rome on $1.50 a day? That’s unbelievable.

When Princess Ann leaves Joe Bradley’s apartment in the movie “Roman Holiday,” he lends her 1,000 lire to tide her over, telling her it’s only worth $1.50 American. The sheltered princess is dazzled by city’s energetic street life and decides to do a little shopping.

As a budget-conscious student living in Rome, I was amazed (and envious) at just how far the movie princess’s money went. A pair of sandals, a gelato, and a haircut later, Princess Audrey Hepburn still had change in her pocket, though sadly not enough for a bunch of flowers offered her.

Today, $1.50 would translate to about €1.12, a far cry from its 1953 value in Italian lire. At best, €1.12 could buy you an extremely small slice of pizza or two fresh oranges at the supermarket. Or one bus ticket.

So how can the average budget-minded soul shop in Rome without help from Hollywood royalty? Well, assuming you’ve found an apartment, as Princess Ann has, you’ll still be needing food.

Italy is famous for its culinary prowess but after seeing menu prices you just might lose your appetite. The trick is to look for small restaurants with a simple look. Rule of thumb: the nicer the interior, the higher the bill. Wander around: Rome is a beautiful city and looking is free. Eventually you’ll find a cozy hole-in-the-wall eatery that will serve up delicious pasta at a price you can eat right up.

Of course, if you’re aiming at sustenance alone, there’s always the local supermarket. Expect to see bigger price differentials than in America: A can of soda that costs 50 cents in the market can run €3 at a restaurant or café.

Princess Ann’s swanky shoes can be yours from a street vendor if you know where to look. Take a cue from the movie and bypass the expensive stores.

Head instead for outdoor markets such as the one in San Giovanni — conveniently located next to a metro stop if you don’t like walking. It’s open from around 8 a.m. to 2 p.m. Monday-through-Saturday outside the park on Via Sannio (closed Sunday). You can find everything from shoes to luggage and also play the haggling game. This worked to my advantage when I was able to buy sunglasses at a third the original price because my confused stare was mistaken for cool determination.

Rome’s largest market is Tratevere’s Porta Portese, open only between 9 a.m. and 2 p.m. on Sunday only. It sprawls between Viale Trastevere and Via Portuense near the river.

Last on Ann’s list was exchanging her long locks for a chic new haircut. Though I never had my capelli styled while in Rome, the low-end price for a normal haircut in Rome is about €15. Most salons, large and small, pride themselves in their work, so you’re unlikely to be subjected to the dreaded American budget salon crooked cut. But Rome is a trendy city. If it’s styling you’re after, be prepared to put aside the coveted Princess Ann budget.

But “Roman Holiday” teaches another valuable lessons. Much of Rome is free. Princess Ann chooses to experience Rome as only a local could, immersing herself in cafes and Vespas, a pleasurable change from the hurried life of the average tourist. True, a 21st century vendor would probably never part with a flower for free, there’s still a city out there awaiting you. All you need to do is smell the roses.