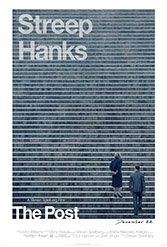 It’s also movie-making that engages two hot topics. The first is the Trump Administration’s effort to diminish the press. President Richard Nixon, with his Assistant Attorney General William Rehnquist (later chief justice of the Supreme Court), tries to prevent publication of the Pentagon Papers, documents spirited out of the RAND Corporation think tank by Daniel Ellsberg because they revealed the Nixon Administration was lying about the progress of the Vietnam War. Nixon is heard ordering Washington Post reporters and photographers banned from White House press briefings, a not so subtle reminder of the sitting president’s banning of mainstream reporters and photographers from the White House press pool whenever he chooses.

The second hot topic and the film’s main story line is the transformation of a woman, who took over as publisher when her husband committed suicide, and who even then saw herself mainly as a party-giving D.C. hostess. Graham moves in short fashion from a timid, voiceless presence in an all-white male boardroom, to an assertive CEO willing to take on her white male advisors and to risk her new career — and the venerable Post itself — by publishing the Pentagon Papers.

Despite touching on contemporary issues, everything about “The Post” is bathed in nostalgia. The plot never strays from its chronological arc, eschewing even flashbacks. After Graham makes her fateful decision, the presses literally roll, papers are bound in string and thrown off delivery trucks at dawn for vendors to pick up and start hawking, a classic montage designed to remind film-goers of mid-20th century movies — and values.

This is an entertaining film, competently constructed. But unlike Graham and Bradlee, Spielberg takes no chances, content to remind us that freedom of the press may be a relic of a bygone era.