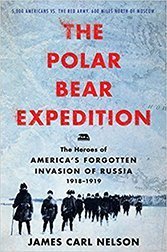 Over the past decade, author James Carl Nelson has filled a lamentable gap and made a niche for himself writing about America’s forgotten war, the First World War.
Two books with detailed titles — “I Will Hold. The Story of USMC Legend Clifton B. Cates, from Belleau Wood to Victory in the Great War” and “The Remains of Company D. A Story of the Great War and Five Harvard Men: The Heartbreaking Story of Five Harvard Men Who Led America to Victory in World War I” — helped introduce Americans to the young men who, in President Woodrow Wilson’s words, made the “world safe for democracy.”
Now, Nelson illuminates an even more overlooked corner of America’s forgotten war. In “The Polar Bear Expedition. The Heroes of America’s Forgotten Invasion of Russia 1918-1919,” Nelson tells the story of the 339th Infantry Regiment with a deft combination of an ensemble character study and historical research.
Between the summers of 1918 and 1919, the 339th Regiment implemented President Wilson’s somewhat twisted reasoning about containing the Bolshevik threat and the civil war that ensued after the Russian Revolution.
The group of draftees, many from the Detroit region, who called themselves the “Polar Bears” joined a combined British-American mission that had an overly-complex brief and conflicting aims. The Polar Bears were poorly armed and poorly led.
Despite instruction from Polar explorer Ernest Shackleton, they were ill-prepared for the conditions. Soon after they arrived in the northern port of Archangel, the 4600 American troops found themselves embroiled in political conditions that were as variable and occasionally treacherous as the Siberian climate.
“This strange, strange war” as one of the expedition’s young officers, American John Cudahy called it, produced acts of ingenuity and courage months after the fighting on the Western Front ended on Nov. 11, 1918. More than 200 men were taken prisoner and only 108 bodies of the 235 men killed were gotten out.
The deaths were never redeemed by the value of a cause. Instead, the only result of the ill-fated mission may have been giving the Bolsheviks new confidence. While forgotten, the Polar Bear story is not gone. It illustrates important points about America’s geopolitical role and involvement in far-flung military exploits, which bear repeating in the current climate.
The Polar Bears’ story also illustrates ongoing concerns about America’s relationship with the inscrutable and unstable power of Russia and the Soviet Union. Recently, U.S. Marine Rotational Force-Europe 19.1 has been training in Norway, which offers arctic conditions not available in the continental U.S. Like all such exercises, this one is a mix of the possible and the potential; what might happen and what to do about it.
The young Marines and their commanders braving the cold would do well to read Nelson’s excellent book. We have been here before.