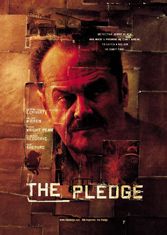 Jack Nicholson is Jerry Black, a Nevada detective who gets a child murder-rape case on the eve of retirement. Moved by the entreaties of the family, he pledges to find the murderer of the little girl. But he can’t. He shambles and probes and drinks. He learns of other similar murders. Finally, he purchases a convenience store in mountains determined to retire from his failure. There, he meets Lori (Robin Wright Penn), who also has a little girl. Sean Penn’s movie is based on Friedrich Dürrenmatt’s 1950s rumination on the emptiness of searching and the contours of futility. Yet Nicholson controls and transcends the material. An early scene in which drunken Indian Toby (Benicio Del Toro) is held and forced to confess is curdling. Penn also recruits Vanessa Redgrave and Helen Mirren in small but vital supporting roles, as if to prove his is an actor’s movie. Really, though,it’s Nicholson’s movie, a concentrated, superlative display.