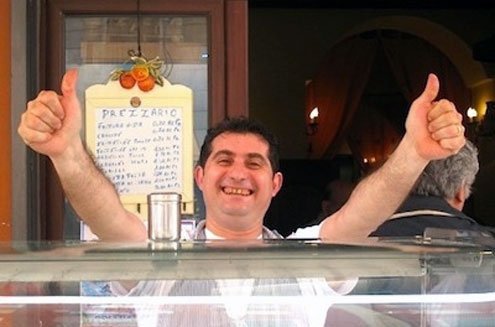 hen I first moved to Naples last October, I was on a mission to find the city’s best coffee, pastries and pizza, hoping to methodically learn about the city through its food. There wasn’t a pizza or espresso in town that didn’t have my name on it, or any Neapolitan elder I wouldn’t chat up for my research.

I specifically wanted to find the best pizza margherita, the classic 19th-century Naples pizza with tomato, mozzarella and basil. Surely if I discovered where to find the finest version of this classic dish, or at least developed an educated opinion on the matter, I’d be one step closer to becoming an honorary Neapolitan. Right?

But nothing in Naples is that simple, especially when it comes to food. After a few weeks of sampling several hallowed pizzerie, I couldn’t identify a clear winner. Even wizened Neapolitan veterans couldn’t seem to agree.

That’s when I decided to take a very non-Neapolitan approach, and the “pizza experiments” were born. My husband and I would go to one pizzeria and share a pizza margherita, each of us consuming half. Then, within the hour, we’d go to another spot and split another pizza. This way could we set up a direct Pizza A versus Pizza B comparison that would allow us to determine which was better. A true scientific experiment.

The problem was that the two researchers didn’t always agree. Even after narrowing down our pizzerie preferite to two finalists, the venerated Da Michele, of “Eat Pray Love” fame (closed most of August), and Pellone, a less-celebrated personal favorite on Via Nazionale, we couldn’t agree on who had won the head-to-head comparison.

Not surprisingly, the results seemed partially dictated by which pizza we ate first, when we were actually hungry. And it also depended on which pizzaiolo, or pizza maker, was working that day. (The gruff, grey-haired man with an eye-patch at Pellone is my favorite).

After several failed attempts to scientifically identify the city’s best pizzeria, I realized that I was chasing the superficial, a pursuit more useful to guidebook writing than finding a sense of place in a foreign city.

Naples is full of pizza variables, including the time you eat, the temperament of pizzaiolo, and the day’s produce shipment. A be-all, end-all answer to a the best pizza question will never be straightforward. For proof, just head to a local bar and ask the locals, “Where should we go to eat tonight?” and watch the debate ensue. Every Neapolitan seems to have a different favorite.

If there’s no consensus (which is often), don’t be surprised if the bar manager stops what he’s doing and personally escorts you to his favorite trattoria.

It took me a dozen “pizza experiments” and some unnecessary calories to understand that the debate is more important than its answer. Passionately discussing food is a favorite Neapolitan pastime. One of the great joys of living here is that I’ll never run out of restaurants to try, or heated culinary debates to have over coffee.

More recently, I did some “pizza experiments” with visiting relatives to spice up their brief stays. Otherwise, though, I’ve abandoned the scientific method. Rather than solving the mystery, I’m just enjoying the experiment.

Here are some noteworthy pizza experiment finds. Not all have websites: