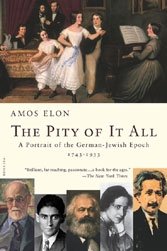 If you didn’t know the story would end so shockingly, you might call Elon’s book a joy. From the start, when philosopher Moses Mendelssohn enters Berlin in 1743 through the gate reserved for Jews, until Hannah Arendt flees the city by train 1932, Elon’s fine work — his last; the Israeli writer died in 2009 — reads like a Balzac novel.

He follows Jews from Eastern European obscurity to a position of economic, intellectual and cultural leadership in the world’s most modern nation, which in the 19th century was Germany. It was in the vanguard of science, the arts, industry, education, and social welfare. To which Jews brought energy, zeal to achieve and above all to assimilate. Wrenching to read how grateful Jews were for the gifts they thought their adopted land gave them. Terrifying to how they rationalized away riots, slights and social injustices — notwithstanding that German society knew of their role in its general enrichment.

The unobtrusive Elon refuses to underline either irony or pathos. His beautiful and empathetic prose is at its best when portraying lesser-known personalities, including aesthete and Foreign Minister Walter Rathenau, who was assassinated in 1922 by Prussian extremists, whose staunch sense of German-ness mirrored his own.

In every respect, this is how history should be written.