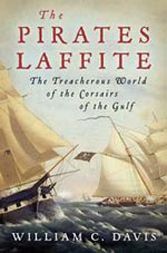 While the porous nature of America’s borders continues to be a hot issue in the post-9/11 era, Homeland Security is hardly a new concept. Davis does an admirable job of telling a story that captures the calculating nature of piracy and its impact on the stability of a young republic. When corsairs roamed the Gulf during the early 19th century, few pirates were more feared or widely respected than Jean and Pierre Laffite. The half-brothers from Bordeaux demonstrated an enterprising willingness to take advantage of whatever respected venture emerged in New Orleans after the Louisiana Purchase.

The Lafittes are characterized as entrepreneurs who set sail for opportunities denied them at home. Their New Orleans syndicate comprised leading bankers, lawyers, merchants, and newly appointed U.S. government officials. As with most other books on this subject, the primary focus is placed on Jean, immortalized by Cecil B. DeMille in “The Buccaneer.”