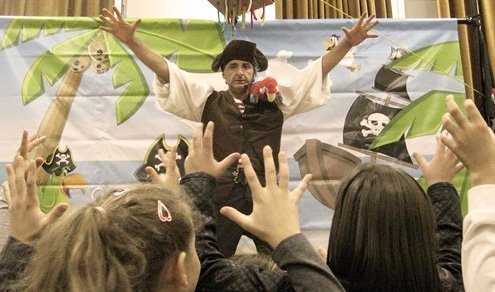 A kids party is all about fun, but it never hurts if values slip into the picture.
A

few weeks ago I celebrated my 21st birthday, which got me thinking about birthday parties over the years. I recalled both parties I’d thrown (make-up and bird themes came to mind) and parties I’d attended (the notorious Nano Gigante’s bouncy castle bash).

Yet one stands out. I was six and that memory is now legendary, at least to me. The party was thrown by my older brother’s friend, so I was there only thanks to the two of them.

But it was the entertainment that changed everything.

The man responsible for it was called Pirata (the Pirate), and to this day I don’t know his real name. But his presence at the party started a Milan trend: soon kids wanted the Pirate at their party for the fun, and parents wanted him because he kept kids in line.

First, imagine the room. It was enormous, with vaulting ceilings. All around were glass tables heaped with photo books that barely made a dent in the space. I felt very small. I was also the youngest child in a room of older, cooler kids, which made me even shier.

Suddenly, a booming voice yelled “SILENZIO!” The yell made silence so imperative that even though I was already saying nothing I felt like saying less.

As stillness reigned, I took in the man who had spoken. The Pirate was solid and round, with a protruding but not jiggly stomach. A red bandana covered his bald head. Before I could notice anything else, he ordered the kids to line up in the middle of the living room. Without question, we all did exactly as he said.

The Pirate then walked up and down the line with his hands behind his back. He surveyed us on the first walk up and laid out the rules on the way back. We were to be quiet when he talked and loud during the games unless he shushed us. There would be no making fun of people, no excluding people, no cheating, no fighting, and no being mean to anyone else. I listened with all my might, terrified that I’d forget something upon questioning. We were to break ranks when he told us to.

As he explained all the rules, mothers lounged around probably discussing who did their child’s homework better, which middle school was the cool one, and where everyone was planning on sending kids to swimming lessons (the Scorpion, I hope).

When the Pirate freed us to move the furniture out of the way, no one made a peep. No spoiled kid whined for his mother to help out. We played many games, but the one that I remember most and that cemented my experience consisted of kids being whacked in the back with a sand-filled burlap sack. The object of the game was to see who could stay in line when whacked. The Pirate would move down the line of kids, whacking away. You had to look straight ahead, so the only way of knowing if you were next was how close the thwacks sounded. Anticipation bubbled in my veins as I caught kids stepping out of line in the corner of my eye. Slowly the thwacking got louder until I could smell the burlap. The hardest part, surprisingly, was containing the giggles, particularly as the thwacks got closer.

The only time I did well in this game was this first time around. Desperate to prove myself, I clenched every muscle in my body to stop from moving. Sooner than I’d anticipated, I saw the kid next to me break ranks. I felt a whoosh of air behind me, and then a resounding WAP! I was wearing white tights that made slipping easier but I didn’t move.

That’s all I remember about the Pirate. Since then, no birthday parties have lived up to his strict vision of entertainment. Soon after, the Pirate disappeared from the upscale Milan party scene, though his name is still spoken in awe. A few years ago my mother ran into him as he was walking his Yorkies. I’d like to believe the Pirate just decided to slip into the shadows, ready to return when a new generation of kids needs him. I know that somewhere he’s out there watching us, making sure that when we have fun we do it together, that we’re not mean, that we follow the rules.