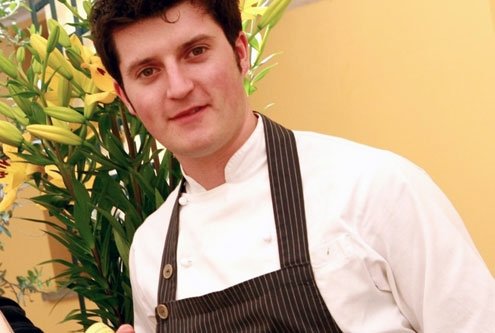 n a hot and sunny autumn afternoon driving along the busy A12 autostrada that runs through the rugged Mediterranean land dividing France from Italy I took a sharp turn north at Ventimiglia. There are hairpin curves, steep slopes, and long mountain tunnels. I emerged two hours later in cool and misty Cuneo, a mountain town tucked against the Alpi Marittimi in the southwestern corner of Piedmont. There, I attended a dinner that was part of a three-day Slowfood Cheese Fair in nearby Bra.

A young local chef named Juri Chiotti, only 25, was presenting his version of montagnarde (mountain) gastronomic and cheese specialties paired with wine. I was eager both to taste the local dishes and see the wine choices.

The evening began well. My table included Maurizio and Stefania; both born and raised in Cuneo, and Giacomo, whose wife Mie is Japanese.

Stefania told us that the first dish, gallina bianca di Saluzzo (white hen from the nearby town of Saluzzo) with Castelmagno d’alpeggio cheese, was among Cuneo’s most famous specialties.

Our mouths were watering. Then came the disappointment.

Though Cuneo is next door to the source of the Piedmont region’s richest and most famous wines, the pairings had been put together by Kettmeir, an enormous Alto Adige winery associated with the Santa Margherita Group that produces a pinot grigio widely distributed in the United States. It’s a decidedly “non-artisanal” company and most of its selections came from international grape varieties such as chardonnay and pinot noir.

Our table’s response was to spend the evening discussing which Piedmont wines we would have paired with each dish. For the gallina Bianca, Giacomo suggested a light, dry white wine like Cuneo’s Roero Arneis DOCG, made from native arneis grapes. A favorite of mine is a costly one made by the legendary Bruno Giacosa, but there are plenty of good alternatives in the €15-€35 range.

Next up was the heavier risotto al nero di seppia e montèbore (black risotto made with cuttlefish, a kind of squid) topped with montèbore cheese. The dish called for clean, dry, white wine to clear the palate. We all agreed on either a Gavi DOCG or a Cortese di Alto Monferrato DOC, both made with the native cortese grape and usually priced reasonably at between €10-€20 euro.

The main course was lingua di vitello, purè di patate affumicate, seiras del fen (Calf’s tongue with smoke flavored potatoes and a local ricotta known as seirass). Savory meat dishes pair well with Piedmont reds such as Dolcetto DOC (lighter) or Barbera DOC (more structured and tannic). Depending on the producer, most are in the €10-€100 range. Some interesting producers are Luciano Sandrone and Aldo Conterno (€12-€25 for Dolcetto; €20-€35 for Barbera).

The cheese course included scrumptious DOP Piedmont cheeses: La Toma dell’Alte Langhe, Castelmagno stagionato (aged Castelmagno), Raschera (from Cuneo) and Chevrin di Coazze (goat’s cheese from the tiny town of Coazze outside Turin). The cheeses made us long for Barolo or Barbaresco, Piedmont’s most hearty and elegant DOCG reds made from nebbiolo grapes.

I prefer the more traditional Barolos and Barbarescos that are not aged in oak and thus maintain the authentic tannic characteristic of the nebbiolo grapes. These include Bartolo Mascherello, Giuseppe Rinaldi, Aldo Vajra, Castello di Nieve and Bruno Giacosa, all in the €50-€100 range.

For dessert, the chef served a millefoglie di robiola di Roccaverano ai fichi freschi (Millefeuille of a soft-ripened cheese from a nearby town with fresh figs). Pairing this with an Alto Adige Moscato was especially hard to take since Piedmont’s Moscato wines are a well-known delight. A light, sparkling Asti Moscato (€10-€12) would have been just the thing.

By the end of the evening, Mie and Giacomo suggested we all meet back in Cuneo for our own private dinner, ending with chocolate (Giacomo is in the chocolate business). Stefania offered to prepare capone di Morozzo, a local dish made from neutered roosters. Una meraviglia, she said. Given Maurizio’s huge smile, I believed it truly was marvelous.

Maurizio and I agreed to confer on the wine selections. We all posed for a photo, gave the chef our compliments, and left with visions of our Cuneo dinner. This time, we’d pick the wines.