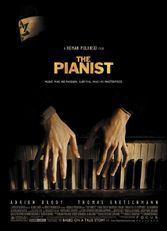 At first, the tranquil Wladyslaw lives on hopefully in the ugly confines of the Ghetto. He’s not a man of action. But his relatives are deported and his remaining dignity vulnerable to the attritions of war. After heavy Allied bombings, he’s surviving on sporadic charity. When that collapses, he’s in the rubble, dependent on the peculiar compassion of Nazi officer who knows of his prewar concert fame.

Brody’s Szpilman responds to his period the way the French Abbot Sieyès did to the French Revolution. Asked what he did in the time of troubles, Sieyès responded only, “I survived.” Brody honors the banal trudge from disbelief to degradation. Polanski’s entire cast is strong (Thomas Kretschmann is affecting as the German officer), but it is Brody’s performance that is mature and accomplished in its plaintive rendition of a bewildered man trying to survive. Brody deservedly won a best actor Oscar. A remarkable work.