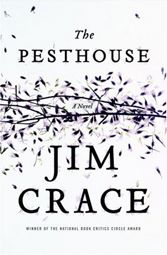 Crace’s tedious allegory imagines post-apocalypse America as a Luddite homestead cut in two by a futuristic (but unnamed) Mississippi. Rustic “emigrants” move West-to-East seeking passage by sea to “Far Shores” away from the “taints and perils” of their medieval nation. Obviousness — America as un-emancipated, Black Death Europe — nags at this counterclockwise morality tale. The wretched refuse of America’s teeming shores is made up mostly of farmers and frontiersmen who drink cider from gourds, pop berries to survive, and yearn for “that better place.”

Crace moves Eastward-Ho courtesy of narrators Franklin Lopez (“from the plains,” a Puritan with a Latino surname and a black beard) and Margaret, a raven-haired, plague-tarred woman (hence “The Pesthouse”) that Franklin meets in river-crossing Ferryville, whose flash-flood devastation opens the novel. Together, apart, and finally reunited, the two American peasants keep this bad-news pastoral focused on a latter-day Exodus. Along the way come rustlers who rape and take slaves, Baptist priests who live in a citadel called the Ark and consider all metals as tools of Satan, and an assortment of humorless Sherwood Forest types. There’s a pinch of colonial America, a dash of the long cabin West, a nod to “Gangs of New York,” and (for good measure) names like Jefferson and Abraham. Modernity is remembered through hand-me-down coins and “sky-high buildings from the history.”

The America of Crace’s imagination ends, or begins, without plumbing and bereft of wit. The “no place like home” kicker can’t decide between Paul Bunyon and Harlequin Romance. Crace is a writer of accomplished pedigree. He can do far better than this post-retro Orwellian sledgehammer that’s missing only a cackling desperado called Bush.