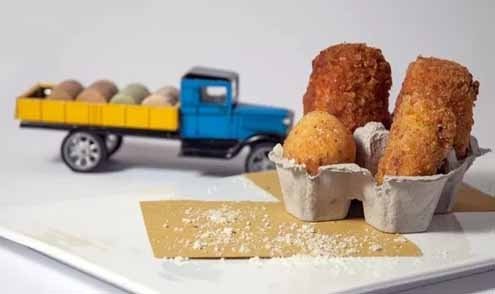 y strongest sensory childhood memory of summer is linked to supplì. I’d emerge from the pool, water dripping from my hair, eyes bloodshot from chlorine, and a towel draped over my tanned shoulders. Suddenly I’d be mesmerized by the aroma of frying supplì, rice balls or croquettes, wafting from the kitchen of the stabilimento.

The familiar and beloved smell preceded my cherished midday snack, which usually followed a morning of water handstands and swimming.

Italian beaches are either open to the public, or accessible via a stabilimento balneare, basically a private beach resort. At the resort, beach-goers lounge by the pool or rent deckchairs and umbrellas before making their way to the shore. My family went all out, renting a cabana for the summer. I remember sitting on the warm sand in front of cabana No. 181. Day after day I’d await the opportunity to munch slowly on a hot supplì.

The crisp, breaded outside of the rice croquette concealed gooey mouthfuls of creamy risotto dressed with ragù and ribbony mozzarella. I’ve had many, many supplì in my life, but none ever topped the ones I ate as a kid.

I even tried going back to the resort as an adult, but the place was under new ownership and the kitchen had changed its menu. The pool water seemed to me to have less chlorine. Worst of all, the supplì were no longer homemade and fried on demand. It felt much like Thomas Wolfe: “You can’t go home again.”

But what I encountered at the resort is now very much the norm. Most commercially available supplì are pre-fried and frozen. They’re small, dry, tasteless bullets not at all reminiscent of my delicate midday treat.

A staple of Rome cooking, supplì — like many local specialties — were once poor man’s food, a thrifty way to recycle leftovers. Early recipes called for ragù made from chicken gizzards that were mixed with cooked rice and shaped into three-inch ovals. These were then breaded and deep-fried. Gradually, the chicken gizzards were replaced by ground meat. The mozzarella filling came later, giving rise to the name supplì al telefono (telephone-style) because the melted cheese ribbons that came when you broke the ball in half looked like the curlicue chord that once connected mouthpiece to the rest of the phone.

Nowadays, Rome pizzerias serve supplì as a starter, though very few are made according to the original recipe.

I never gave up hope of reviving my childhood memory. As a result, I’m still seeking the perfect supplì. If I ever do find it I’ll head straight for the warm sand around cabana 181, water dripping down my back, and again turn nine.

— Supplizio Chef Arcangelo Dandini and I share the same childhood supplì passion. Such was his love that he opened a small supplì shop near Via Giulia (he already has a restaurant where they’re also on the menu). The ambiance is cozy, with brick walls, sofas, vintage lamps and terracotta floors. Toys are scattered on a large coffee table. The supplì come in bianco (white for mozzarella) and rosso (red for ragù) as well as more gourmet-style presentations (butter and anchovies, carbonara or cacio e pepe). They’re served in open cardboard egg boxes. The fridge offers bubbly and select wines. • Supplizio Via dei Banchi Vecchi, 143. Tel. 06.8987.1920.

— Franco e Cristina About half-way up the Jewish Quarter’s main drag is non-kosher Franco e Cristina’s small pizza al taglio joint. The pizza toppings are nothing special, but the supplì are another story. Shaped and fried fresh every few hours (based on the traditional recipe), these are some of the best and cheapest in town. Get yours every day (except Sunday) for only €1 a piece. • Franco e Cristina Via del Portico d’Ottavia, 5. Tel. 06.687.9262.

— La Gatta Mangiona This Monteverde neighborhood pizzeria serves some of the city’s best pizza. And where there’s pizza, there’s always supplì. They offer the traditional version with ragù and mozzarella and gourmet options including supplì with gorgonzola and herring, spicy all’arrabbiata, or with saffron and wild asparagus tips. • La Gatta Mangiona Via Ozanam, 21. Tel. 06.534.6702.