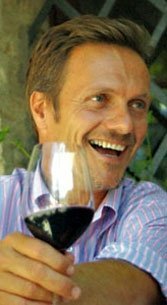 eonardo Bellaccini gently held up the bright green, spring growth. “At this time of year, the vine is full of energy and spirit. Once it forms clusters of tiny green grapes, we prune off a lot of the leafy growth and all but two clusters. When the grapes change color, we prune again so that all the energy of the plant goes into only one cluster of grapes.”

“Only one bunch of grapes per vine? Is that what you said?” I had to be sure I had heard him right.

“So you pass through the vineyard many times to look at each plant?”

“Ma certo,” he smiled, “we do all the pruning, selecting of the grapes, and harvesting by hand. These plants are ‘our babies’.”

As I stood in front of the Campogiovanni vineyard, which faces southeast, Bellaccini explained that climate change has led his company to investigate purchasing north-facing properties. “Even with the fresh sea breezes that we have coming up from the Maremma and the altitude on these slopes, the vineyard is getting noticeably warmer.”

Picking the grapes before the arrival of warmer weather doesn’t ensure they’ll have the same flavor or balance. All aspects of terroir interlock. Bellaccini pointed out a majestic oak in the vineyard. “Whenever we have a really exceptional year, we choose the very best grapes from those two hectares at the edge of the vineyard for a riserva called ‘Il Quercione’ [the big oak].”

Brunello has a near-mythical tradition that goes hand-in-hand with that of such Italian wines as Amarone (Veneto), Barolo and Barbaresco (Piedmont). By DOCG regulation, it must be made only with brunello grapes (a clone of the sangiovese grape different in turn from the sangiovese clone used to make Chianti).

In the fall 2007, Brunello was rocked by a scandal when Italian customs officials impounded thousands of liters that appeared to contain a small percentage other grape varieties. While the “big boys” (including Antinori, Banfi, and Frescobaldi) bore the brunt of the blow, the scandal cast a pall over all of Brunello’s 250 producers.

As a result of the two-year scandal, the Consorzio di Brunello, the producers’ group, debated how Brunello should be made in the future, coming down squarely on the side of traditional rules. The group voted to maintain the 100 percent sangiovese requirement.

As we entered the cantina, Bellaccini walked briskly toward the huge steel vats of wine, scooping up two glasses along the way. We first tasted last fall’s (2009) Brunello and Rosso from steel fermentation vats. After that, we went to the back of the cantina to taste from the large oak barrels or botti. San Felice ages its Brunello for three years in botti and a year in bottles, while the riserva, Il Quercione, spends two years in botti and three in bottles.

It was May 2010, and the most recent vintages we could sample from the bottle were the 2005 Campogiovanni Brunello di Montalcino and the 2008 Rosso di Montalcino. The Brunello was very “young” since it should ideally be drunk after 10-15 years (15-to-23 for Il Quercione, the riserva). The Rosso also needed more time since it is best after five-to-six years.

These structured, complex and intense wines are not for quaffing at a cocktail party. The rich flavors of Brunello (well-ripened dark fruit with hints of tobacco and leather) call for pairing with hearty foods: red meat, game, especially cinghiali (boar) or strong cheese like aged pecorino. The tannins, which were strong when tasted from the barrel, serve as an ideal counterpoint to the fattiness of the meat or cheese.

The Rosso is less complex and structured than Brunello but still an elegant wine best paired with a meal, say spaghetti alla bolognese, porcini mushroom sauces, and lighter meats like pork and veal.

As Bellaccini drove me back to the restored Borgo of San Felice, where he keeps his office, he told me about his research into vitigni autoctoni, the native grapes of Tuscany.

Two decades ago, he began traveling through the region and talking to small farmers. He was startled to discover more than 200 genetic varieties of grapes. With the help of horticultural researchers from the University of Florence, he began planting them in a field at San Felice.

“Back then,” he told me, “the big international varieties like chardonnay and cabernet ruled. It was hard to get anybody excited about local grapes.”

In fact, Bellaccini has been pushing the importance of sangiovese-based local varieties for a long time. In 1994, well before he’d broken through, he expressed his preferences to The New York Times. “There is a homogenization of taste and wine styles taking place in the world,” he told the paper’s wine writer, Frank Prial, “and we want to preserve the unique character of sangiovese.”

By all accounts he’s succeeded. When we got to San Felice, I tried Bellaccini’s 2004 Pugnitello, made from the pugnitello grape variety that has emerged from some 20 years of experimentation involving both the vineyard and the university. The grape is shaped like a fist, pugno in Italian, accounting for its name. The wine has a rich aroma of cherries and almost a smoky scent. The taste is robust, but velvety smooth.

I later discovered that the 2006 and 2007 vintages had received the coveted “tre bicchieri” ranking from the Italian food and wine guide Gambero Rosso, the highest rating.

Brunello is also influenced by the more general debate over what kind of technique to favor, whether traditional winemaking that reflects “terroir” or “modern” methods that yield bolder, fruitier wines with oakier flavors.

As the argument rages, here are some of my preferred traditional Brunellos. Most sell for between €35 and €45 (the most recent vintage is 2005). Prices are higher in the U.S., for older vintages and “cru” or “riserva” wines.