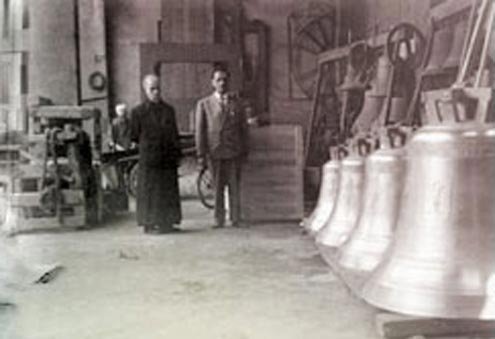 A priest examines bells in the 1920s: Smaller bells were forged, then moved by carriage.
H

idden behind a nondescript iron gate near Milan’s chaotic ring road is the Fonderia Napoleonica Eugenia, a silent, medieval borgo, or outlying district, made up of ancient brick buildings and cobblestone streets. I’ve been invited there, to a dinner and performance of Japanese theater.

Before the performance begins, the owner, Remigio Barigozzi, a tall, amiable man, with thick white hair, shows us around. He says tells us that monks once ran a hostel here housing mostly pilgrims seeking a miracle cure in the waters at the adjacent church, Santa Maria alla Fontana, built in 1507, after Charles d’Amboise, the French governor of Milan, was cured there.

The Barigozzi family, prominent bell makers in Northern Italy and Switzerland, bought the foundry in 1861 and still own it. In the borgo, workers dwellings, warehouses and offices are now available as rentals while the foundry itself is a museum. The property, once far outside city walls, has been gradually enclosed by the expanding city. Barigozzi has refused to sell to builders, even though the borgo now lies in the shadow of lucrative, high-rise complexes.

The foundry floor is paved now to accommodate dining tables and high-heeled shoes but it is peppered with glass-covered holes, some small, some enormous, where bell moulds were buried during casting, so the hot, liquid bronze wouldn’t crack them.

We see a huge two-part furnace for burning wood and melting bronze. Barigozzi says three furnaces made theirs the only foundry big enough to cast large-scale monuments, including the Dante statue in New York’s Central Park and Milan Cathedral’s magnificent bronze doors. Until recently, bronze couldn’t be welded. Statues had to be made in one piece.

Bell carillons were always made from a single batch since tin and copper (both bronze additives) were mechanically weighted. Proportions varied, as did density, so the sound that each batch emitted, once in bell form, was different.

Barigozzi says the old custom of “improving” sound by adding silver or gold was a scam promoted by itinerant founders who pocketed the precious metals. Silver and gold are soft metals that if added to bronze reduce vibration and ruin sound.

Once made, a bell’s pitch cannot be changed. We look at ledgers recording the complicated measurements needed to produce each bell’s complex sound. The human ear hears only the lowest fundamental tone and two others, but many unperceived harmonics enrich and personalize the sound, which is unique for each bell-making family.

In the 1930s, the international “La” was established at 880 vibrations/second. Before long, bells made earlier seemed flat. During this period, the Barigozzi made bells destined for Leningrad (now St. Petersburg) using the lower pitches. Those bells remain in storage, useless now.

Churches liked to pay for bells “in natura,” bells in exchange for wine troves. From the 1600s, the Barigozzi had foundries in wine-producing regions of Asti and Pavia, where bells were often paid for with a damigiana di vino (a month’s worth of family wine). He says, “That’s why we also had a wine shop.”

Finished bells were transported by a procession of horse drawn, wooden wagons, a difficult and risky undertaking. A rut in the road or a broken wheel could cause a bell to crack, requiring its recasting. In 1869, it took two steamrollers to pull the statue of Vittorio Emanuele II up the steep Garibaldi Bridge to Piazza Duomo. It was often easier to move a foundry than a bell or a monument. As a result, bells for distant locations were usually made on site. They were blessed and dedicated before being raised. The whole village celebrated.

After World War II, the Italian government offered financial incentives to replace bells that had been requisitioned or destroyed by bombing. This created a bell-making boom, which was soon followed by a slump. Bronze monuments fell out of favor and bells had become too expensive to make. One reason was a lack of cheap labor (foundries were once manned by local orphans). Another reason was the skyrocketing price of copper, used for electric wires and, after natural supplies were depleted, obtainable only by recycling. In 1970 the Fonderia Napoleonica Eugenia ended its bell production.

The foundry is a beautiful place, with high ceilings and large windows. During the performance I’ve gone there to attend, a solo Japanese voice resonates as it would in a great, silent cathedral. It’s hard to imagine the roar of furnaces, clanking machinery, shouting voices.

The performers ring a bell to announce the next act — a hanging, Barigozzi bell. I can hear its three tones. The biting, shrill one quickly disappears, the middle one lingers as a mellow compliment to the low fundamental tone, which seems to last forever.