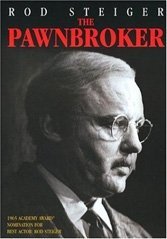 Sidney Lumet merged two themes, Holocaust guilt and ghetto awareness, in this flawed Euro-American story that highlighted Rod Steiger’s virtuosity. He is Nazi death camp survivor Sol Nazerman, a Harlem pawnbroker whose latter-day woes ignite bad memories. But this is hardly about a man slipping from newfound grace or revisiting unspeakable hardship. Nazerman is fully shaped: an acidic, bitter, biased, a blemished creature with a rant for a soul.

Lumet is less concerned with conventional narrative than delivering a series of daguerreotype that illustrate bias and opportunism in a man who can no longer tell the difference between past and present. Steiger’s genius is in the jittery way he comes to collapse. Annoying flashbacks aside (early jump-cut editing), you feel Nazerman’s walls closing in. Worth it for Steiger alone.