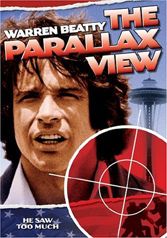 Alan Pakula’s thriller graduates from “The Manchurian Candidate” school. Tipped off by a TV anchor who’s then murdered, in-your-face investigative reporter Joe Frady (Warren Beatty) starts suspecting that the assassination of U.S. Senator Bill Joyce (which opens the movie) may be part of a corporate conspiracy. Getting anyone to believe his theory is another matter. Frady trawls ambiguously from insight into paranoia. Evidence mounts that the so-called Parallax Corporation is recruiting unstable figures to carry out assassinations so they can then be passed off as random acts of mayhem (an Oswald theme).

Pakula anticipates the nerve-wracking tone of the handheld camera generation by putting Beatty in a thrilling swirl. What he thinks he sees, not what he knows for sure, jars his instincts. Once haughty, Beatty’s edgy Frady is humbled into fright. Delivering effective menace through tangents was once its own art form. Not so much now.