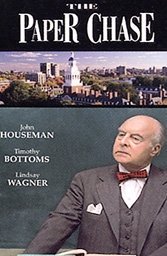 Timothy Bottoms is James T. Hart, a first-year Harvard Law Student who is forced to reckon with a pitiless professor named Charles W. Kingsfield (the late John Houseman). The mirthless Kingsfield conducts intellectual Boot Camp. Hart falls for Susan (Lindsey Wagner), Kingsfield’s daughter. This would seem to bode ill for all involved except that James Bridges’ movie has less to do with love affairs than the repartee between professor and student.

Hart worships Kingsfield and submits to bullying (“Mister Hart, here is a dime. Take it, call your mother, and tell her there is serious doubt about you ever becoming a lawyer.”) Hart, kicked out of class, calls Kingsfield an SOB. “That,” remarks a typically wry Kingsfield, “is the most intelligent thing you’ve said all day. You may take your seat.”

A writer, teacher, producer, and friend and rival of Orson Welles, Houseman holds the movie in the palm of his hand. Beneath his intellectual crustiness is a man who likes bright students because they remind him of himself. Bridges adapted a novel by John Jay Osborn Jr. Houseman won an Oscar