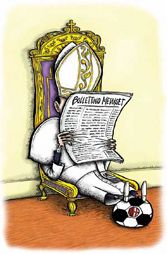 ho should be pope after John Paul II? The elegant and convincing arguments of Roberto Pazzi concerning the importance — the necessity, indeed — of ensuring that it should be an Italian will already have left their mark on many readers’ thinking. Generously translated into the tongue of the barbarian conqueror, Pazzi’s remarks went around the world thanks to The New York Times and the International Herald Tribune. For those who missed them, his idea in a nutshell is this: The papacy is inherently an Italian institution, since “the archetype from which the pope descends is that of the imperial Caesar.” He also argues that only an Italian is in a position to maintain “the typically Latin cult of beauty” which has made the Roman Catholic Church the principal patron of European art over two millennia. Finally, he mentions, with understandable diffidence, some of the shortcomings of the Polish impostor whose presence has so hamstrung the policies of the church since 1978: pointing out in particular that the former Archbishop of Krakow has allowed purely national experiences to influence his thinking and doctrinal understanding, something it would plainly be unthinkable for an Italian pontiff to do. For all these reasons, then, only an Italian will be able to steer the Vatican back on to the straight road.

Pazzi points out that before the election of the Pole there had not been a non-Italian in the Big Chair since the death of Adrian VI in 1523; but this is too modest. A glance at the entire list of all 262 popes so far shows that Italians have always predominated. There have been occasional idiosyncrasies and aberrations (one Portuguese, for instance; one Saxon), and before the great schism with the Eastern Church, there were some Greeks in the job, along with representatives of other ancient Roman imperial provinces; but the main thing has always been that Rome is first of all Italian. The general use of the Latin language, the universal vehicle of learning and truth, symbolized that fact. Conversely, the failure of Latin around the world has gone hand in hand with the decline of the church and its intellectual and spiritual authority.

But let us be clear about one thing. The weakening of the Church is the work of foreigners. The papal bull “Unam Sanctam,” issued in 1302 by the Italian Boniface VIII, established the Italian view of the correct weight of the papal office. This very reasonably asserted the actual political primacy of the pope over all the secular monarchs of Europe. This is the tradition of the Caesars indeed. Contrast this magnificence with the mean-spirited doctrinal nit-picking of Martin Luther, or the entirely reprehensible Calvinist pietism which led to the disaster of Anglo-American capitalism: and no further argument need be applied. What have been the results of the Reformation? Of taking that steady Italian hand off the tiller? The universal collapse of morality, of political order, indeed of all logic, art and beauty in the world.

The prospect of a succession of foreigners — Africans, Asians, God-knows-what — treading in the footsteps of St. Peter is simply too appalling to be borne, and the last 26 years have demonstrated the results of inaction and passivity. As Pazzi points out, in Italy the hand-in-glove subtlety of a political system where the power of the church was ever-present and cheerfully accepted by all gave the Italians the boon of the Christian Democrats, with the “miracolo economico” the happy result. Under the Pole, the church has drifted further and further away from the problems confronting Italians in their daily lives, as John Paul II has concentrated on his increasingly ga-ga anti-Marxist crusades, and on a joyless insistence on the least appealing aspects of the church’s unfortunate line on sexual matters.

No, enough is enough, and plans must be laid. If, God forbid, the machinations of foreigners prevail, and another of these heathen is foisted upon the faithful, then the Italian cardinals should remember the precedent of 1409, when a council at Pisa elected an independent pope. That would be better than nothing. But much better would be to make sure that nothing like this could arise ever again.

Let us look coldly at the realities of today. The Pole is old, and soon he will go. An Italian must replace him: but which Italian? Someone with stature, with imagination, with a sense of destiny, with a sense of modernity, someone with his finger on the pulse of the Italian people … Merely to state the problem is to resolve it. There is only one man who fits the bill. In the great days of the papacy, as the beautiful palaces of Rome still bear witness, the fundamentally false distinction between spiritual power, financial genius, and political ambition was not made. The great were simply recognized as the great. If we are looking for a 21st-century Barberini, Corsini or Borghese to come forward in this, the hour of need, where will we find him? In Angola? In Paraguay? No, he is before our eyes. It is the man who has renewed the Italian political system who should be petitioned to save the world’s true religion too. The modernizer. The creator. The homo italicus par excellence. Pushed on always by the love of the Italian populace, he has seized every office he has set his sights on, and nothing can stand in his way. Let us therefore accept the inevitable and prepare, with joy in our hearts, to bend the knee to Pope Silvio I. Future generations will stand before the Vatican in the Piazza Berlusconi and weep with gratitude.

— Christopher Lord’s writing is widely published in Europe and the United States. He lives in France.

About the Author: Christopher Lord