The origins of a good “Crafternoon” 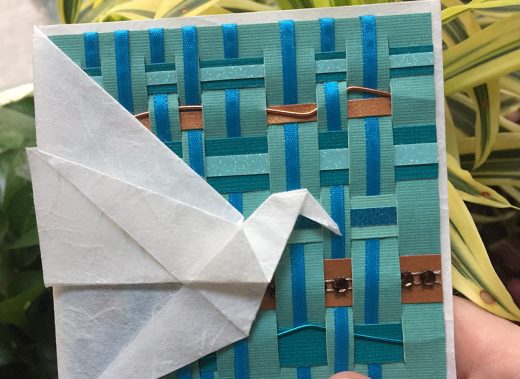 Origami crane notecard made out of white mulberry paper. Front decorative panel made from woven strips of paper, ribbon, and wire.
I

t was the best of times, it was the worst of times … And Dickens aside, it really was.

It was March 2009. The world was in a financial tailspin. Each day’s headlines cried of more bank and business woes, mass layoffs, and record unemployment. I was working as a high school literature textbook editor at McGraw-Hill in downtown Chicago. We had come to the end of some big projects, but we clung to hope. At least I did.

Origami crane notecard made from black Nepalese lokta paper. Front decorative panel made from overlapping circles of green paper and rhinestones in a “cat eye” shape.

Then one morning, the majority of our office (40 or so employees, I think) got the email version of a pink slip. The company was sorry, “The economy, you know,” and so on. We were given a few short hours to clean out our desks, turn in our ID badges, and leave the high-rise building where we all worked.

Though I knew that the same thing had happened, was happening, all over the country and the globe, I was stunned. I called my then-husband, cried, gathered my belongings, and said good-bye to the people who had been my co-workers, some my friends, for almost two years.

My coworker and dear friend Lisa’s husband picked us up, and we drove to their house in the suburbs. We cried some more. We drank wine. We sat in her Jacuzzi tub.

Then we did crafts.

When I’d started working at McGraw-Hill in 2007, Lisa and I bonded immediately over a pair of Native American earrings I was wearing — a style of jewelry she adored as well. We quickly found other shared interests, including crafting and hunting for antiques.

While looking for new jobs, we needed something positive to occupy our newfound free time, to quell our anxiety, and perhaps most importantly to keep our spirits up. Crafting together filled all those needs.

It was Lisa who coined the term.

Rhinestone fish swimming in a hand-painted sea of kelp; done on wood.

We were in her finished basement one afternoon, each crafting with our respective materials. Lisa typically favored paper and glue for collages, and back then for me it was beads and wire to make wire-wrapped silverware. There might have been an old black-and-white movie on in the background, or an LP playing softly. Maybe we were chatting, laughing, and talking in caricatured British accents (Lisa’s has always been better than mine). Or maybe we were working in a comfortable peaceful silence.

I don’t remember quite how it came up. But we’re both writers, both word people, pun-loving people, so really it was only a matter of time.

It was perfect. One word, three syllables, that captured everything: Recently unemployed editors, crafting their sorrows into joy in the middle of the day.

That was almost a decade ago. But unlike so many things that fade over the years, that friendship, that word, and that love of crafts have all stayed with me.

I don’t live in Chicago anymore, so sadly my Crafternoons with Lisa are more infrequent than I’d like. To keep the tradition alive, I’ve welcomed other people into the Crafternoon circle. A friend from medical school here in New York City, my sister in Missoula, Montana, my mom back in Chicago. Far from being an exclusive club, we’re always welcoming new members. No experience necessary.

Not long after that traumatic layoff in 2009, I decided to go to medical school. In 2010, I started a blog to share that journey, www.docwithpen.org. That journey has been especially stressful of late, which means I’ve ramped up my crafting. To chronicle this parallel (and more visual) journey, I’ve just launched a sister site, www.docwithpaper.org, where I will be posting pictures of my Crafternoon creations.

It’s a tradition — and a word — worth keeping.