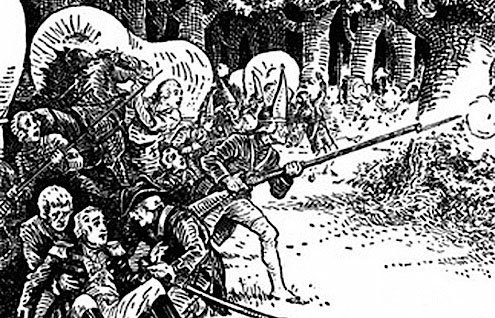 nce upon a time, Joey announced there were Prussians in his bomb shelter. “Big ones,” he said, widening his palms alarmingly. Big Prussians were rare. “I think they’re looking for the jelly jars.”

Normally, my politically adroit cabal did not take Joey’s shrill concerns seriously. We were, after all, considerably older than 10 — 11. We knew better than to believe that really big Prussians were really in stalking Joey’s bomb shelter for jelly jars. I mean, why would Prussians come all the way here, from the Orient.

Everyone nodded. The idea of Hessians foraging for jelly jars in Joey’s bomb shelter was far more probable than Prussians, since, well, why shouldn’t it be?

“Hessians do that all the time,” added Martin, shrugging.

What, we asked Martin later, was the difference between a Prussian and a Hessian?

“Prussians are, like, older,” answered Martin, rolling his eyes. “They don’t care about jelly jars. They kill you first, like in Cuba. Then they go after your Dad.”

Martin’s father was an Air Force general. He knew everything. Knowing everything, we gathered, was good. Once, Martin’s father — General Dan — came to school in his dress uniform. It had stars and colors and ribbons. He showed the class a film in which planes broke the sound barrier and gave a talk about how our way of life was “effluvial.” Joey thought this had something to do with big worms but couldn’t find it in the dictionary, which was wrong because it was really called a fractionary.

Then General Dan bent down to us and said, “Boys, these are difficult times. Be strong.”

We took what he said very seriously, since we didn’t know what else to do.

At school, we had air raid drills weekly.

Then we were whisked into a damp basement room where the science teacher, Mr. Mallory, told us about isotopes and fallout. Joey would always listen attentively, unless Martin pinched him, which made him yelp. This, in turn, caused Melissa — who sometimes wore pink lipstick — to sigh, “Joey, you are such a baby!”

Martin giggled and tugged on her dress.

SILENCE! shouted Mr. Mallory. “Joey,” he said, “don’t you see this is about life or death!”

Mr. Mallory, who always spoke in big words, explained that we were living in the most dangerous times ever in human history and that the Russians and the others were eager to exhale us, and that unless we really listened we’d all just be cinders in the end. “You will tell your grandchildren that you persevered the isotopes — if you’re careful.”

About this time, when Martin was nearly kissing Melissa (another dangerous part of human history), Joey announced out loud that he had to go to the bathroom.

Which was met by silence.

“You can’t, not now,” said Mr. Mallory, who seemed to be imitating General Dan. “In a real war, you make sacrifices! You can’t always do what you want! Be strong and wait.”

Joey began weeping, which is when Mrs. Jackson announced that Americans didn’t cry, which only made Joey cry harder. Finally, Martin, who said he’d already kissed Melissa but really hadn’t — not that we could see — escorted Joey out of the basement and down the hall.

When they returned, Mr. Mallory said, “In a war, this would not have happened. In a war, Joey, you would have been a cinder!”

Joey said that he’d rather be a cinder than a Prussian any day, and Mr. Mallory sent him home.

When we met up later, Joey gave us a strategic update: the jelly jars were safe.

“Told you it was just Hessians,” said Martin.

And he lived to tell his grandchildren.