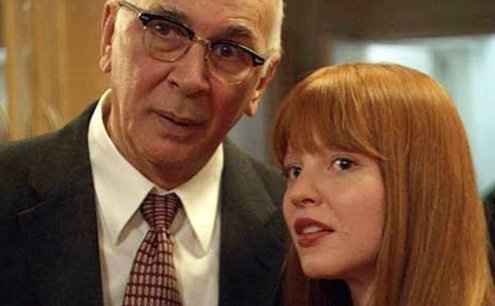 eonard Schiller (Frank Langella) is a commercially overlooked but respected New York novelist living out his later years trying to write a final novel, “my one remaining goal in life.” Widowed and recovering from heart surgery, his central preoccupations are maintaining his regimented daily typing routine and remaining close to his thoroughly non-intellectual 40-year old daughter Ariel (Lily Tyler), a Pilates teacher who dotes on him.

Enter 25-year-old Heather Wolfe (Lauren Ambrose), a Brown graduate student who hero-worships Schiller and wants to cover his work in a thesis she hopes to turn into a magazine profile. Retired professor Schiller is elegant, guarded and mature of purpose, his “morally earnest” sensibility carved from cliffs long withered. The erratic, hero-worshipping Heather, playing with a slumbering fire whose heat she cannot feel, gains the author’s trust and confidence, teasing him into rediscovering a physical and emotional nimbleness he if fact no longer possesses. It’s beautifully cruel process captured in a way that gives Schiller and Heather the right of perspective.

Andrew Wagner’s poignant if frequently overlooked film, from a novel by Brian Morton, is principally about two things, neither of which appears often in tandem in American cinema: writing and aging. Aging is these days tied to stories of dementia, while the writing life rarely makes an appearance at all. Novelists are no longer heroes, at least not in the way they were in the Hemingway era.

Wagner all but hands the camera to Langella, then 69, who obliges with an exceptional rendition of a writer, and a man, deep into his twilight, attempting to come to grips with his daughter’s troubled romantic relationships and his own love labor lost. Heather can’t decide whether she wants to be Joanne Didion, Joni Mitchell or Joan of Arc, but in fact she’s a smitten child in love with words she hopes to possess by loving the writer. And the writer capitulates, at least in part. A novelist’s role, he says, is to “wait around for the characters; wait for them to do something interesting.” Heather has made his life interesting, or so she thinks.

The age-youth, young writer-old writer paradigm as played out by Schiller and Heather is based entirely on small gestures, the making of coffee, tentative handholding, glances focused and astray. The subplot of Ariel’s romance and desire for a child is less interesting, and lead-the-way sentimental score doesn’t help the whole.

Still, this is poised and mature work, noble even because of Langella’s inhabiting of a writer who’s demeanor and life story borrow amply from Lionel Trilling, Saul Bellow, and Philip Roth, among many others. Few scripts come as close to this one in illuminating the contours of mind of a certain kind of mid-20th-century writer, those trained, better or worse, in discretion. “Don’t grow old,” Schiller advises, but even if you do, keep a typewriter handy, because old writers never die, they just fade away.

Starting out in the Evening ★★★ 1/2 Directed by Andrew Wagner. With Frank Langella, Lauren Ambrose, Lili Taylo and Adrian Lester.