The Notebook, the Proof, The Lie: Three Novels 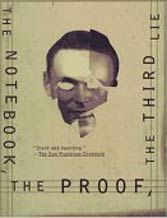 By Agota Kristof, translated from the French by David Watson and Marc Romano

“The Notebook,” part one of this extraordinary trilogy, is the dark tale of Claus and Lucas, two remarkably intelligent young twins who are left with their poor and wicked grandmother in an unnamed Eastern European village during World War II.

Described in short sentences stripped bare of sentiment, the survivalist exploits of the boys make for mesmerizing reading. Two more razor-sharp children would be hard to find in any book. But are they, in fact, two? Or is the twin an invention of one boy defending himself against devastating loneliness?

In “Proof,” the second part, things get murkier and still more compelling. Claus has escaped to the West; Lucas, disjoined and disconnected, awaits his return. Only toward the end of part three, “The Lie,” does the truth become clear. Or does it?

The only sure thing about this masterful trilogy is that with it, Kristof accomplishes the near impossible: making the nightmarish quality of myth seem like child’s play compared to the horror of a more plausible story.