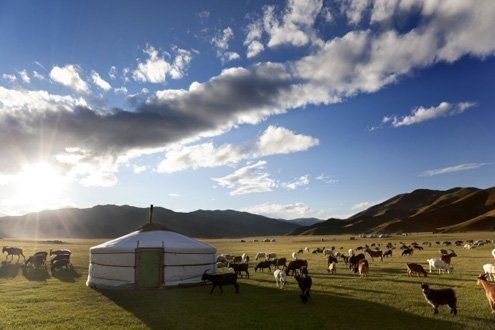 Can Mongolian DNA produce a woman who doesn't know what home is?
H

ave you ever read something that describes you so accurately you’re left to wonder how the author (in this case a dead one) could’ve known you so well?

In “The Moon and Sixpence,” W. Somerset Maugham suggested some people were born out of their “due place,” tossed into their surroundings randomly. Never having felt quite at “home” anywhere but in my head, his words left me wondering if perhaps I’d met him in another life. Maybe he’d interviewed a previous me before sitting down to write his post-World War I novel.

I can’t be sure if my state non-belonging is the result of my nomadic upbringing as a military brat, or because I was born on “foreign” soil (Germany), or an offshoot of my scant Mongolian DNA.

I do know I have one of “those” faces, the kind many find familiar. I’m frequently stopped at airport security for an additional inspection. I don’t seem to belong comfortably to any one nationality. The lack of easy labels can be perplexing and unsettling. Some people stare. They seem to question me as much as I question myself. Unlike my European friends, many of whom can tell you of the travels of their great, great grandparents and explain where they settled, I can’t even tell you where some of my aunts are uncles live today.

“What exactly are you?” is a question I’ve gotten more than a few times both at home and abroad, where ethnicity and roots tend to play a deeper role in society.

Likewise, when European friends visit me in Seattle they invariably tell me how north-westerners seem Germanic or Nordic. To me they just look American. But I’m not seeing them through foreign eyes. I don’t identity the facial and physical features my European friends associate with ethnicity or country of origin, and at times with specific cities.

For years I thought all Americans were slightly nomadic. After all, we were pilgrims. We left homes far and wide to settle here. My mistake was to confuse immigration with being a nomad. As I’ve aged and traveled, I have come to see that humans don’t include home when they contemplate their place in the world. Most feel like strangers only when they’re on the road, and even then, as Bruce Chatwin once observed, travelers are often part of “small exclusive groups.”

It’s different for me. I feel like a stranger even when I’m supposedly at home.

People born out of their due place, Maugham goes on to write, “have always a nostalgia for a home they know not. They are strangers in their birthplace, and the leafy lanes they have known from childhood or the populous streets in which they have played, remain but a place of passage. They may spend their whole lives aliens among their kindred and remain aloof among the only scenes they have ever known. Perhaps it is this sense of strangeness that sends men far and wide in the search for something permanent, to which they may attach themselves. Perhaps some deep-rooted atavism urges the wanderer back to lands which his ancestors left in the dim beginnings of history.”

Occasionally, often unexpectedly, I find myself in a place where I immediately feel I belong. These are the places that stir up nostalgia. It happened recently in Port Townsend, a sleepy little art town on the Strait of Juan De Fuca, near Puget Sound. I found myself strolling down the long beach in search of sea glass for my collection when I came upon an open field to my left. To my right was the sea (or the strait), and further beyond, Canada.

Full of tall grass, the field seemed endless. Someone had cut paths for walking trails. In its center was a large pond with a sprinkling of houses, each one set back and separate from the other. Some had walls of windows, allowing nature to flood in. A horse neighed from a spot near a pond. The horse, the faint sound of waves, and the birds chirping gave everything a quiet, peaceful feel. I instantly felt I was home, in the open, by the sea, in a place I could live. I swelled with nostalgia.

I suppose I should take the word nomadic more seriously. My nomadic ancestors roamed, and that roaming often meant crossing open fields. I sense it is toward those open fields that I’m wandering, the final destination of my migration still unknown.