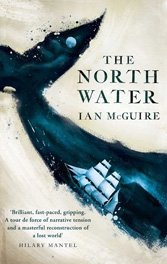 It is somehow appropriate Mexican director Alejandro González Iñárritu released his tale of North American survival and revenge, “The Revenant,” at about the same time as British author Ian McGuire signed off on his second novel, a gripping Melville-Poe-Conrad styled account of 1860s whalers sailing from Hull to Hell at the self-serving behest of a wealthy schemer named Baxter. While “The Revenant” is about fur trappers in the brutal 1820s Dakotas, “The North Water” pushes those Dakotas into “the seething hillocks of an adamantine sea,” focusing on the journey of a captain (Brownlee), a first mate (Cavandish), a surgeon (Sumner), and a harpooner (Drax) as they steer the ill-fated “Volunteer” toward Greenland with brutality, bad news and perversions as their only companions. Henry Drax — whose name conjures up Nosferatu — is a casually depraved rapist and killer motivated by instinct only. Irishman Patrick Sumner, a laudanum addict escaping a checkered Siege of Delhi past, is his ethical antithesis, and the book’s detective-flavored driving force. McGuire’s tactile prose surges carnivorously whenever whales stir and blubber leaks (“The men, empurpled, reeking, drenched in the fish’s steaming, expectorated gore…”) But “unnatural schemes” percolate behind the reek, and the failure of those schemes soon provides for surreal landscapes (shades of Poe’s Arthur Gordon Pym) as the story scuttles wickedly toward ice floes and ursine entrails.

Headed north, McGuire pays excellent homage to writers who pioneered the whale and whipped sea adventure story, his blood-and-guts prose gorgeously illuminating the nooks and crannies of human hardship and bodily stink. He writes of “strait gates to a larger darkness” where “enormous icebergs loom like broken and carious monuments…” The sum of gutted innards is enough to supply the whole of the unscrupulous 19th-century. Later, though, with Sumner front and center, McGuire loses his way in a snowy wasteland that includes willful Eskimos and a Godforsaken priest, recovering his story just in time to deliver a bludgeoning coda.

Like “The Revenant’s” Hugh Glass, Sumner survives the worst of the tundra in the warming “fecal perfume” of a slain bear, “dead flesh tight around him like an overcoat.” He becomes a savage to hunt one, Drax. There are no real winners here, not even among the living, a species in short supply by the novel’s end.