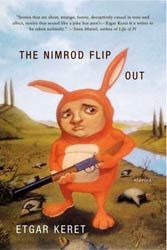 By Etgar Keret, translated from the Hebrew by Miriam Shlesinger and Sondra Silverston

One story title all but sums it up “A Thought in the Shape of a Story.” Keret’s slew of eccentric half-tales are populated by enigmatic, bombed-out souls that reek of sex and bad choices. His Israel is an amalgam of drudgery and blue-collar black magic. Ronel’s “beloved dog” Darko licks his balls but ends up dead; this is Keret’s typical atypical. Elsewhere is a girl nicknamed NASDAQ; talking fish; hemorrhoids that “the open like flowers in springtime”; a woman who gives birth to a midget pony, masochistic moon-dwellers, and a cat who’s “had it” with Israeli life. Since few of Keret’s fables run more than a few pages, surface tension — both tender or brittle — stands in for depth, precariously so.

Two of the better stories, “Fatso” and “Your Man,” are “Metamorphosis” knock-offs. In “Fatso” a hot date morphs into a squat fat man, and back; in “Your Man,” a vulgar dwarf is a metaphysical pimp in disguise. At their best, these 30-something characters gnaw at personal eccentricities to reveal the psychosis that is life in Keret’s disturbed Israel (“a lump of sweat and dirt that’s developed a consciousness…”) Too often, though, the people are merely thoughts in the shape of souls spewing black humor for effect.