The Nile? Bottoms up! 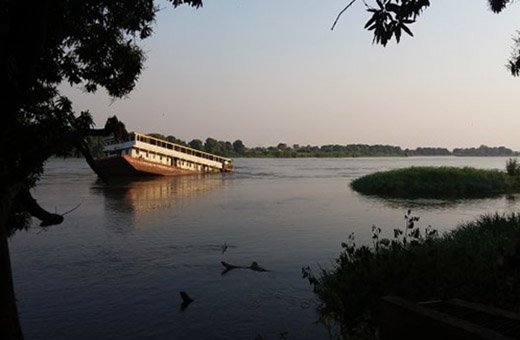 By boat from Khartoum to Juba is a nice idea, assuming the Nile permits safe passage.
Y

ou can take a boat up the White Nile from the Sudanese capital of Khartoum, but there’s no guarantee you’ll make it all the way to Juba, now the capital of South Sudan. At least there wasn’t in November 1979, when the country was still unified in name and Andrea (my ex) and I were traveling in Africa. Our native informants in the Khartoum were unanimous: any tub that didn’t run aground on some dry-season riverbed would likely be hijacked by pirates.

So we decided to brave a flight on Sudan Airways. It landed safely, belying its nickname of Inshallah Airways (inshallah is Arabic for “as God wills,” with no reference to security).

At the time Juba was a village of some 100,000 souls who lived in mud huts arranged in circular compounds, where pit latrines would have been too high-tech. It was so hot that government office hours ran from 5 to 10 a.m. Roads were all rigorously composed of dirt, with almost no cars on them — since you couldn’t find gas even on the black market. Little to do most days except hike the five miles to the market, where we could gawk at the squatting sellers, buy peanuts, and, if we were lucky, get some lemons we could turn into lemonade if we managed to score bottled water and sugar back at the hotel. We were staying at the town’s second-best. It boasted electric fans, which worked for exactly four hours each evening. Meals were a few leathery tidbits of meat served on an otherwise empty plate three times a day, with milky tea on the side. I lost five kilos in two weeks.

A good portion of that journey’s total calories were gobbled down in one evening, at a vast whisky-drenched party with live music. The extravaganza was thrown by a government functionary whose name we’d been given at the Sudanese embassy in Rome by the staff’s token southerner. “Government” was something of a euphemism, North and South already separate, de facto if not yet de. South Sudan finally acquired statehood in 2005.

I spent much of that bash bizarrely reminiscing with our host about our respective times at Harvard, and listening to his cockamamie plan to make a million bucks by peddling ice cubes to inhabitants of Juba.

One day we heard a local guy playing a kind of lute, strung with the sort of strings you tie parcels with. It was irresistible, so at our next market foray Andrea headed off to hunt for the instrument-maker so that he could buy one. I plunked myself down at a rickety wooden counter where I could quench my thirst while watching the vultures swoop, and exchange pleasantries with the broad jolly woman who ran the stand. Soon it was 11 a.m., later than our usual outdoor time, and far hotter. I drank glass after glass of sweetened black tea, figuring boiling would have killed off the germs. The other customers were guzzling water, which the woman behind the counter ladled from huge jars. These were buried in the ground up to their necks to keep their contents cool.

I drank glass after glass of sweetened black tea, figuring the water was sanitized.

She turned out to be not Sudanese but Ugandan, one of the tens of thousands of loyalists of recently deposed dictator Idi Amin who had fled to southern Sudan, driving their herds before them. Her Queen’s English would have passed as native in Cambridge, England, where she said she hoped to send her daughters to university one day.

Moments later the euphoria faded and panic set in. Suddenly, all the names of all the water-borne infectious diseases I’d been taught about in medical school floated to the surface of my mind. I started counting down incubation periods.

I spent hours waiting to be stricken by staph and dysentery, days for the onset of salmonella and cholera, two weeks for giardia and typhoid fever, four weeks for amebiasis, six weeks for hepatitis A, and a year for Guinea worm disease. What a great way to spend the year after a vacation.

Miraculously, I never got any of them.

— This the first in a three-part series about the author’s travels in Africa in the late 1970s.