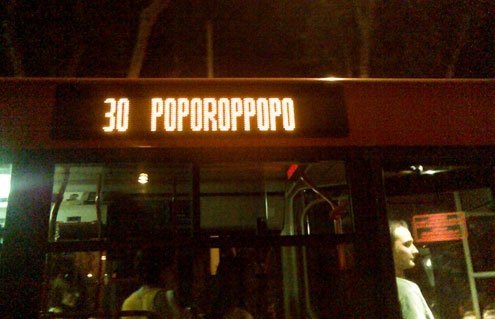 Off! Get off! Ecco, I brought you to your stop!
F

or years in Rome I took the night bus home a few nights a week. The first one was the N-91, which ran from the center, near where I worked at Via del Governo Vecchio, to the last stop and Via Laurentina. Later, I took the same night bus to the heart of Garbatella, and walked the final nine minutes to my apartment in San Paolo.

My friends were concerned for my safety. Who knew what kind of people rode the night buses? But after a while the ride became so regular that even the eccentricities turned tedious.

I got on at Piazza Venezia at 3 a.m. with a little old man, his spine so curved that he stared at his knees when he walked. He lugged himself up with his right hand and cradled his mandolin with his left. Sometimes his son accompanied him. They never said a word to each other and got off in Montagnola.

On Via Marmorata a couple got on together nightly, and grudgingly. The man with his hair slicked back and a gold tooth gleaming, the woman with a cotton candy mound of yellow frizzy curls floating around her head. She tugged along a dog the size of a kitten, and he pulled a small speaker but had no instrument. They got off bickering on Via Ostiense.

My bus driver looked like John Turturro. He’d salute me shyly when I stepped up, and wait a few seconds when I got off, watching me, assessing my safety on each given night, I imagined. I felt at home with the strange characters of the night bus. Even safe.

Until one night I boarded the bus and cigarette smoke billowed out the front door. Three people were grouped around the driver’s seat, smoking and chatting loudly. The driver was not Mr. Turturro. Once he got started he hurled the bus madly along its course. He ran red lights, pushed off before exiting passengers’ feet had hit the ground, and on the first night he skipped a whole section of the route.

He stopped at the Garbatella metro station, and instead of finessing the tight curves of the ancient neighborhood, turned left on Circonvallazione Ostiense and drove straight to the Cristoforo Colombo, where he resumed the bus’s usual course. I was furious. I got off at the corner of Circonvallazione and walked 25 minutes along the Colombo highway, waving benignly to a global entourage of prostitutes who walk that street at night.

The next night produced the same results, with an added stop at a buongustaio so that a friend of the driver’s could get a snack and some smokes. I watched from my seat as the barista heated his sandwich. Again I walked Colombo alone, cars pulling over to proposition me. When John Turturro didn’t reappear I learned to get off at the Garbatella Metro stop and walk home along longer but safer streets.

Then in mid-December, weary after work at 3:30 a.m. and walking with weary feet under sheets of cold rain, I was fed up. I decided to demand my civil rights. I screamed at the driver, “Are you going to run the correct route or do I have to get off here and walk in the rain?”

His posse of six turned slowly to glare at me. They were smoking cigarettes, drinking beer, laughing hysterically. They all responded at once. “Who are you?! Expletive deleted foreigner!” But driver demanded silence. Certainly he would take me to my stop, he said.

I sat down contentedly while he turned away from my house, taking his usual shortcut to the end of the line. I thought he’d drop me off on the way back. When we arrived at Laurentina, he ordered all the passengers off. “Except la ragazza!” he ordered. He turned the bus number and lights off, and pulled out into the streets. Then I got it: The bus and driver were no longer on duty after the final run, hence the hurry to get to the end of the line every night. The sooner we arrived the sooner the party began.

The woman of the group, dressed in hot shorts, heels, and fishnets, had a small pipe and blew the smoke at me tauntingly. The men sat around me and chattered. The driver circled along winding streets until I had no sense of the city.

It was 4 a.m.; rain lashed the windows that reflected the faces of the revelers in yellow and red, filtered through street lights and bus coloring. It was 4 a.m. in Rome and I finally realized that I had been kidnapped by my bus driver. Red panic flashed in my mind, blending with the red of the bus’s interior, until the bus came to a crushing halt and the doors opened.

The driver stomped towards me. “Off! Get off! Ecco, I brought you to your stop!” I wanted to tell him that it wasn’t my stop, that I had no idea where I was.

Instead I scrambled off and stood under a blanket of rain as he drove away. I made a formal complaint about the driver but nothing came of it. So I shrugged and bought pepper spray and a bicycle.

Now, I wonder at what point fear of the world will stop me from living the Rome life I love.