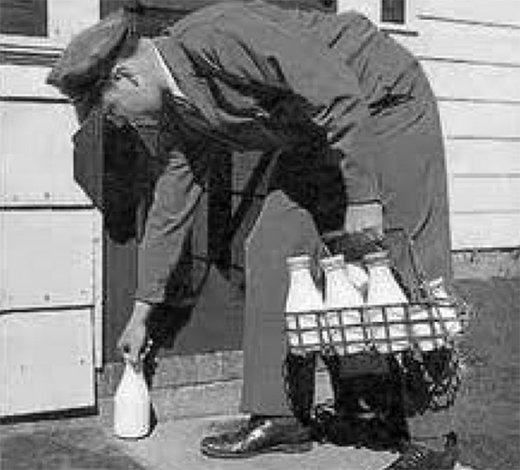 The Trump milkman is another breed of man.
A

s a young journalist in the mid-1970s I tried hard to emulate the style of the writers I’d grown to admire in college. This short-lived homage ended when a veteran wire service editor informed me my college loquaciousness would be intercepted and assassinated by the New York desk, the agency’s border patrol and linguistic hit squad. The desk had no patience for words such as “disabused,” swearing instead by the Kansas City milkman approach to news writing. That philosophy called for terse news dispatches written in terms a Kansas City milkman could understand if not appreciate. The milkman of the agency’s imagining was a modestly educated working class male with traditionally conservative leanings (work, family, country) that might never visit New York City or Los Angeles, let alone travel to a foreign country. At home, he might belittle Harvard graduates as eggheads and see some politicians as elitist thieves.

In writing for the milkman, you could take nothing for granted. Critics would later label this approach as “dumbing down,” but it wasn’t. It existed to rein in literary-minded reporters who expected everyone to know Berne was the capital of Switzerland and Iranians weren’t Arabs. The word “disenfranchised” might be precise but it would win you no friends outside the ivory tower.

Just as news agencies once used oversimplification to get the milkman’s attention, Trump pitches conspiracy theories to their gullible offspring.

Though the figure of the milkman is gone, America’s partisan divide has seen the spirit of the expression grow in scope.

A case in point was the recent disappearance and murder of a Saudi journalist. On the East Coast, the “New York Times,” “Boston Globe,” and “Washington Post,” the triple pillars of progressive daily journalism, immersed themselves in the case of a reporter apparently eliminated by a repressive regime willing to do whatever it took to muzzle “meddlers.” Russia’s Vladimir Putin’s has long adopted a similar approach.

Given the bottomless animosity between President Donald Trump and traditionally liberal newspapers, the attention paid to the fate of the Saudi journalist was harbinger-like. If in charge in Saudi Arabia or Russia, Trump would likely play by totalitarian rules the United States forbids, or so went the subtext.

Examined more closely, however, a Trump’s press bashing seems less like a plot — he likes attention — than a milkman maneuver, namely simplistic propaganda made to appeal to the offspring of the males that once defined the Kansas City bromide.

While liberal enclaves fretted over Middle East intrigue, Trump was at a Montana campaign rally preaching his gospel of American greatness at threat from the leftist peril while praising an up-for-reelection Republican congressman who assaulted a reporter as “my kind of man.”

Just as news agencies once used oversimplification to get the milkman’s attention, Trump pitches conspiracy theories to their gullible offspring. Deprived of communism and Islamic extremism, they’re now urged to hate the press, and do. The precursor to this fervor, lest anyone forget, was the Tea Party movement, a pickup truck rebellion that gained considerable suburban traction a decade ago.

Not so incidentally, the anti-communist barnstorming of the 1940s and 50s also ran through the hinterlands. Joe McCarthy, a Marine-turned-senator, was born in rural Wisconsin.

Aware of its volatile content, Trump goes only where his message needs no decoding and audiences applaud him as a David to a godless Goliath that include smartass castrating women who file lawsuits speak in tongues.

Not by chance, his admirers tend to live in places my early editors mentioned while demanding simpler words. “That won’t go in Ohio. Do it again.” And I did.

In the end, Trump is his own hybrid milkman, an urban muckraker with parochial leanings who believes all would be fine if he just got his way unimpeded. Fascism? Perhaps. But if so, it’s of the adolescent kind.

He is clearest when he lapses into mockery and insult, regressing to pre-civil maleness. And that’s all some 21st Century milkmen need.