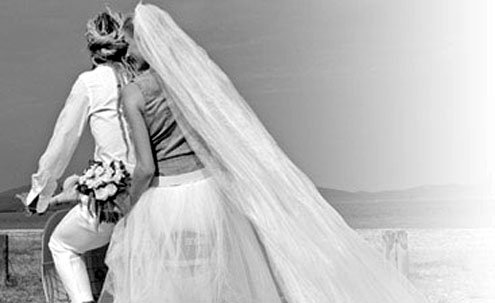 ot all of Fabio’s friends have been put in carcere, or jailed, as they like to put it cleverly — or so they think. While most are married, on the verge, or “tied down” (another favorite male expression), a few lone cowboys still mope around the corral.

My sense is that even those few are getting ready to toss in their lonesome cowboy hats.

I always thought women were the ones under siege to settle down marry, have children. Biological clock stuff. But apparently some men have the same kinds of longings. How sincere they are is another story.

More than a year ago, a friend of Fabio’s with a reputation as a ladies’ man — he’d never had a serious relationship — visited us in Rome, his “girlfriend” in tow. She wasn’t a companion, no, he insisted. They were just “amici.”

We’ll call her Lucy; close enough to her real name. You could tell by her expression that she was up for more than just a fun weekend. They flirted all the time.

At the same time he told me bluntly that he was getting tired of the whole bachelor game and ready to start a family.

Nah. He wasn’t interested in her. Why would he be? He’d only brought her to Rome for the weekend. For a little bit of fun. Wink, wink. Then he turned serious: “Everyone around me is getting married. It’s the thing to do,” he said. Lo fanno tutti.

I was perplexed. “Just because everyone’s doing it, doesn’t mean you have to,” I told him. “You should do it when you meet the right person and when it feels right.”

He looked me straight in the eye: “No, next year will be my year.” Sure enough, the next year he found a girl, married her, and the two had a child in the blink of an eye.

An isolated case, I told myself, until I ran into another friend of Fabio, Giorgio. He’s a bel tipo, as they say in Rome: tall, handsome, a ragazzo del Sud. Giorgio, a police officer, has no trouble with girlfriends.

That day, dressed to the nines, decked out in full uniform, he must have turned a few heads. He stopped me on the street and chatted me up about Fabio. “So tell me how is it? How’s married life?”

I always laugh when guys ask me this. Deep down inside, they must suspect (or fear) that a woman’s inner demons, lurking deep down inside until the wedding ceremony, emerge like banshees as soon as it’s over.

“It’s the same as before. Remember, Giorgio, we lived together for a while…”

So what was new with him? “Mi sposo a luglio,” he replied, a July wedding. “Si si, beh. Lo fanno tutti ormai.“

Was marriage really the “new black,” a fad? Did everyone wear marriage at Milan Fashion Week?

I admit Giorgio took me by surprise. “Really? Who are you marrying? That girl I saw you last year with at Campo de’ Fiori?” He shook his head. “Who, that girl? No, no. Not that girl. I got new one. I just met her late last year. I found her in my hometown.”

Great news, I told him.

He then grabbed me by the arms and looked at me squarely, worriedly: “You got any advice for me? Am I doing the right thing?”

Oh Lord. Living together before marriage is actually a good test for the real thing, I advised him. It can also help prepare you for some brutte sorprese down the road.

Yeah, I told him. In bocca al lupo. Good luck.