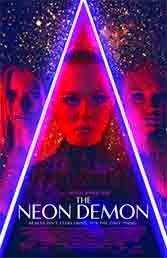 Stripped of its reams of pretentious surrealism, Danish director Nicolas Winding Refn’s acid trip of a movie is a sinister take on the modeling industry and the (literally) flesh-eating perils of envy. Wannabe model Jesse (Elle Fanning) is a barely legal newbie parked in Pasadena dive motel run by hostile nut jobs. She can’t sing. She can’t dance. But she’s pretty. And also pretty naïve. Yet her virginal je ne sais quoi aura — teen blandness aside — mesmerizes designers (“A diamond in a sea of glass…”) and drives struggling rivals to love, loathe or crave her, make-up artist Ruby (Jena Malone) first on the list. All want whatever it is she has, giving the phrase “good enough to eat” a life of its own, with the unsullied “it” girl as the main course.

Refn sexualizes his every move while harpooning a house of horror modeling industry sculpted from fashion magazine cliché (the narcissistic demands of fashion, not Jesse, is the real “neon demon”). He also drenches every second scene in throbbing techno, as if hints of cannibalism and necrophilia fed on its bass notes. Connecting narrative dots doesn’t sit well with hallucinogenic visions. Nor does storytelling. What matters instead is giving kitschy wickedness the space it needs to bleed beauty into a banquet. Pass the ketchup.