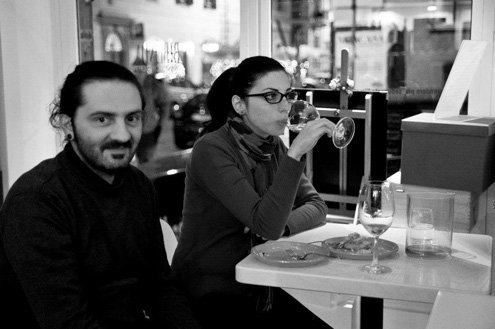 ne could argue that Les Vignerons owners Antonio Marino and Marisa Gabbianelli were children when they first tasted natural wine. “I come from a family of farmers and grew up in the countryside near Benevento. We made our own wine. It was contadino wine, artisanal. It was common to sip wine even as a child.”

In 2006, at Verona’s Villa Boschi wine fair, Antonio tasted wines by Le Coste and Dario Princic, two of Italy’s historic natural wine producers — and the childhood memories came rushing back. “Princic’s Sauvignon, which is no longer produced, stuck me. I remembered the wine that I drank as a kid near home. It hit me as I left Villa Boschi, I had an epiphany of sorts. I had tasted something different.”

Marisa grew up in a town outside of Rome where wine was a staple at family lunches and dinners. One day, drinking a Pinot Grigio, she had her own Princic moment. “Up to that point every Pinot Grigio I had tried was clear white. What I saw in Princic’s Pinot Grigio was its true color. It made me question why producers altered the color of wines and more.”

Since then, Antonio and Marisa have dug deeply into the subject of natural wines and craft beer. They’ve attended hundreds of tastings, done extensive research and met countless producers throughout Europe.

These explorations led to the discovery of small vintners who intervened only minimally in the winemaking process, keeping chemicals and artifice at bay. In 2010, they opened their own wine and beer shop, Les Vignerons, in the Tor Pignattara neighborhood of Rome. Their success has allowed to move to more central digs, with a Trastevere location set to open by late February.

Gina Tringali discussed their philosophy and individual paths over coffee. These are excerpts from their chat.

Talk to me about the name Les Vignerons and what it means to you?

Antonio: Les Vignerons were those who broke away from the large Maisons in France not just literally but also in terms of their mentality. They set aside assistance from chemicals (pesticides, industrial fertilizers, and so on), and focused instead on terroir. Our Les Vignerons store encompasses this small world. It’s about promoting producers who do quality work, without attracting much attention. This also applies also to beer and how it’s made. We choose beers from small producers too who work as artisans.

How was the shop born?

There were various steps. Marisa and I worked together in an enoteca where the owner wasn’t all that interested in natural wines. He favored traditional names that would sell easily. At the same time, the craft beer world was beginning to explode in Rome. It wasn’t at today’s levels but there was a lot of interest and even a few places where you could drink it.

We talked about opening a shop in 2009, envisioning a place that offered natural wines and select niche craft beers. When we opened in 2010, our intention was to offer only wines made without chemicals by small artisans and beer made through spontaneous fermentation, which is very similar and tied to natural wine.

At the time, there were only six or seven beer shops in Rome, and Alessandro Bulzoni’s shop [a wine store on Viale Parioli] was the only point of reference for natural wines.

What about the beer side?

From the start, we knew we wanted to offer beer and wine that was linked to a specific territory, which expresses terroir. Historically, styles of beer were born in different countries and these countries are often the best representation of that style. We decided to focus on craft beers made in a traditional way, such as lambic — the classic Belgian sour beer — and on German brews, especially from Franconia, and British brews. We also paid attention to new U.S. and Italy trends, and to what was happening in Spain, Denmark, Sweden and Norway.

Beer is different from wine. You can create a Belgian beer in the U.S. but a good Keller from Franconia can’t be imitated. Dozens of pseudo-beer shops have opened in Rome since 2009. Craft beer has become trendy. But we’re less interested in being fashionable than finding beers that reflect tradition and a territory.

And the wine side?

There was no exclusively natural wine shop in Rome. We’d buy from Alessandro Bulzoni. His family-run Enoteca Bulzoni was the first to offer natural wines, which is an eye opening fact. Bulzoni is an enoteca that stocks a bit of everything, from traditional to classic wines. When we first started talking about natural wine no one had even heard of it. Alessandro did great work.

People were skeptical at first. Things even got problematic. In 2012, Italian agriculture ministry inspectors accused Alessandro and Ricardo Bulzoni of fraud for selling vino naturale. But it wasn’t fraud. They were ambushed. The idea was to give more detailed information about certain wines because they were more tied to territory and to sustainable agriculture and sustainable wine production. Spreading information, not to discrediting others, was at the root of the whole thing. The problem was, and is, that there is no approved definition for natural wine.

So people are judgmental?

It’s easy to put us in a box. In reality, we’re just independent enoteca that chooses to focus on natural wines. As a result, we’re labeled as “extremists,” which is wrong. What we’re really doing is offering an alternative. It doesn’t bother me if a person sticks with wines that I don’t love. I will continue to promote the world of natural wine, which is the one I believe in. We’re simply a niche enoteca, not extremists. An extremist is someone who lives in Italy but decides to eat only fast food. That would be an extreme choice.

What we’re doing, I repeat, is giving the consumer more information about wine. But that brings us back to the classic problem with wine, namely that it doesn’t come with a label and an ingredient list.

In basic terms, tell me how a consumer can understand the difference between commercial and natural wines.

I don’t like the term naturale. For me natural wine doesn’t exist. There’s only wine. But, if you use pesticides, and so on, what you’re making with isn’t wine. Natural wines contain no artificial additives.

I don’t care if the label “natural” disappears. For now, it’s necessary to differentiate what we sell. Many clients ask us if we sell organic wine. But the organic label, “bio” in Italy, doesn’t tell you anything aside from the fact that the grapes were grown using organic farming.

What we believe is that a producer should add as little as possible throughout wine production. If the grapes are perfect and the weather was great during the growing season, there should be no reason to add a thing. If it rained a lot you may need to add a bit of sulfur, which can happen.

What we’re saying is: “Just tell us what you did.” That’s part of the reason we try to meet all the producers whose goods we sell.

Give me a reason why I should try natural wines and craft beer.

For your health and body. The less doctoring goes into a substance, the better. If you listen to your body, it’ll tell you, “Give me something I can absorb. Given me something I can remember.” Natural wines are not all equal but the central idea takes us back to not adding anything artificial, including additional sulfites.

How do you choose wines and beers that you sell?

We try to meet each producer and brewer, visit vineyards, cellars and breweries. That’s what makes us different. Once upon a time, distributors basically told wine stores what to stock. They’d push wines that were “in.”

Sufites are increasingly mentioned as harmful. Talk to me about that, and its relationship to natural wine.

Marisa: There’s a trend now to say that sulfites can make you sick and that they shouldn’t be ingested. It’s just not true. Sulfites are naturally present in the wine making process. Even some natural wine makers add them.

What a consumer most needs to know [from a wine maker] is how they make their wine and what it contains. Wine is wine. Natural wine is not new. Some producers have been at it for hundreds of years. They’ve produced natural wine but haven’t defined themselves as natural wine makers because that’s the only way they knew to make wine. Even some well-known makers of “natural wine” don’t define their wine as natural, including Valentini in Abruzzo and Rinaldi in Piedmont. These are people who see no point in adding yeast from another wine to give it a different aroma. Or don’t add additional sulfites at all. The people who add and mix at will form part of industry that to me creates a product that is no longer wine.

Which Italian regions are most promising in terms of natural wine production?

Antonio: Keep an eye on Campania, Abruzzo, Lazio and Umbria

If I’d never tasted a natural wine before, what would your suggestions be?

Marisa: It varies by person. There is no one wine that you need to try. We might start with wines from the eastern part of Friuli, Emilia-Romagna, the Asti zone of Piedmont, Iripina in Campania and Maremma in Tuscany.

Can you suggest restaurants and bars in Rome where you can drink natural wine or craft beer with a meal or appetizers?

Antonio: In the city, try Epiro, Mazzo, Trattoria da Cesare and Litro. If you’re willing to venture bit outside of Rome, there’s Osteria Iotto and, in summer, Il Tino. For craft beer, check out Bir & Fud, Stavio and Barley Wine.