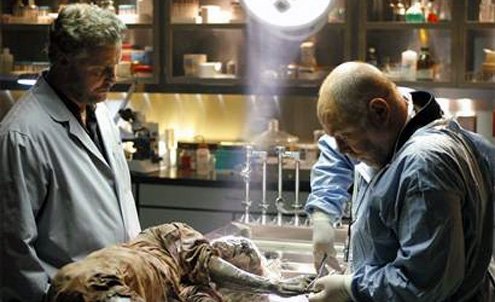 The clues are in here somewhere...
S

o much for television’s consoling effects. Pummel disbelief long enough and it does the nasty in Mumbai.

My days are rudimentary. I work in spurts; I peer out the window as jets float toward Rome’s Ciampino Airport, the city’s low-budget hub. Airplane hubbub is TV’s equal, except at night. With no planes to stare at, I give in.

For decades, all American and British TV programming in Italy was dubbed. Woody Allen’s alien squeak was made dolce. I shut him down. Him and others.

Cable changed the picture by offering original-language options. Woody got back his whiny Americanese; Morgan Freeman was re-educated — what a relief! — into English.

Crime mysteries are a must in the time-killing business. Old school tastes led me to the “C.S.I.” franchise and a range of procedural Americana, with early 1990s “Law & Order” atop the mountain. But that was an exception. Entertaining television dulls defenses (it also stirs Lloyd Bentsen-to-Dan Quayle urges, as in: “I know a good story, sir, and you’re no good story!”)

But mindless is as mindless does: Cometh Jack Bauer, Grissom, “Hotch,” Jethro, and (God help us) Horatio. They wore cool sunglasses and spoke my homeland’s pleasing patois. I could have done without the ongoing cleavage scare, but others probably couldn’t. I took one for the team.

But as post-9/11 fever abated, so did narrative. Most non-HBO series stopped being about anything. To compensate, they piled on more sunglasses, cleavage, cars, furry vibrators, abs, weapons and tattoos. Women were made idiotically sexy at the expense of dumber males. They got decidedly non-Audrey Hepburn lines, as in, “Rainmaker, how wet do you want it?” In “Las Vegas,” the pedigreed James Caan pasted on a sly smile as if to say, “It’s a joke, stupid!”

For a while, I went with the flow. Mindful of the mindless but determined not to turn to jets at night, I slipped into a state of permanent arousal, awaiting the next hot cardigan. I dreamed of shows where characters would dress, not undress. Plots would focus on after-sex buttoning.

But what happened next surprised even me. Soft-core pornography was one-upped by… necrophilia.

My crime shows stopped being about crimes or their solving. Cool sunglasses were pushed aside in favor of savaged dermis. My diligent disbelief began blinking fast.

I decided to record a week worth of highlights.

In one series, a headless victim is dissected by a nerdy morgue doctor who then has sex with an office-mate. In another, a medical examiner hovers over a decomposed cranium whose eye sockets swarm with maggots. The camera then shifts between cleavage and maggots, unsure which voyeurism to linger on. There’s also the serial killer who overnights a human heart (we see it) to a forensics team, followed by fingers (we see them, too). Breast implants are de rigueur on female corpses (the implants have serial numbers).

Sex kits are the dark side of sex kittens. “We found nothing in the vaginal vault,” says a deadpan expert examining the corpse of, what else, a brutalized model (“Pretty girl,” he remarks). While the vagina is hot, the penis remains coy. It’s the organ all wish to implicate but no one dares show, dead or alive. Lucky penis.

Pretend has its precincts. So does foreplay. But does 40 minutes really require two cut out hearts, a decapitated head, four severed limbs, 13 close-ups of torn flesh (I counted), and a suggestion of sex with an eye socket? Not even way-cool shades patch over so much bad liver.

The graphic and the ghoulish are no strangers to celluloid. But horror has a rousing purpose. This is something else again. Pile on the morbidity and revulsion stops being a cartoon. It becomes, well, disgusting.