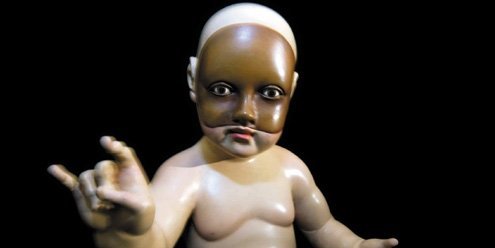 eandering through the narrow, litter-strewn streets of Naples, I pause on Vico dei Maiorani to examine a commemorative plaque that features Pulcinella, the masked and long-nosed theater character considered the embodiment of Naples, and Totò, the Neapolitan Charlie Chaplin. The text reads: “La vita è come l’albero di Natale. C’è sempre qualcuno che ti rompe le palle.” Translation: “Life is like a Christmas tree. There will always be someone to bust your balls.”

Naples can be a cosmic joke, where the sacred and the profane thrive side-by-side. Mounted in a wall across the street from the plaque and adorned with flowers and candles is a shrine to the Madonna and Padre Pio. Meanwhile, grandmothers shout down four floors to wandering children and motorini with families of five aboard zip up the street.

This seamless unity of opposites plays into the hands of the Scuotto siblings — Salvatore, 35, Raffaelle, 33, Emanuele, 27, and Anna, 23. The three brothers and a sister are the brains, imagination and deftness behind La Scarabattola, an artisan’s workshop founded in 1996 to develop Neapolitan presepe, the city’s traditional nativity and manger scenes. More recently, though, the family artisans have taken to representing and embellishing the Pulcinella myth. A masked villain and joker (he is “Punch” in Britain), Pulcinella’s tragic-comic antics have been a cornerstone of Neapolitan theater for centuries.

But the Scuotto family takes Pulcinella to places he’s never been, transforming the scamp into a Neapolitan “Darkman,” a magical and frightening man-child who both torments and redeems the city. “Naples is a difficult place,” says Salvatore Scuotto who, with brother Raffaelle, created La Scarabattola, which refers to the wood and glass container that houses most nativity scenes. “Pulcinella has always represented Naples, but he is a figure without dignity, weak and without pride. In our fables, he is courageous. We made him a hero, a superhero.”

Little about the Scuotto family background explains what ignited the children’s startling imagination. They were born, raised, and still reside in Naples’ noisy Sanità quarter — Eduardo de Curtis’ (Totò’s) neighborhood. There’s no family tradition in art: their mother is a housewife; their father works at the Naples port.

While the art of making presepe usually runs in a family through generations, the Scuottos started from scratch. In 2000, the Spanish royal family asked the family to make 147 farmer figures for use in the palace nativity scene.

My introduction to their art, and to their vision of Pulcinella, came last fall at the Chiesa di San Severo di Pendino on Via Duomo in an exhibit called pulcinellarifavola. On display were seven terra cotta “illustrations” created to accompany Pulcinella fables written by Chiara Graziani. The Pulcinella tradition dates to 16th-century Naples, when actors used masks to help explain the mood of their characters.

But for the Scuottos, Pulcinella is a portal into a world of limitless magic. In one corner of the Chiesa San Severa, Pulcinella perches on the moon, which is suspended from an iron spiral staircase. In another, Pulcinella is crushed between masses of stone but is reborn as an infant representing salvation.

It also gets grisly. One scarabattola, with makeshift blood on the glass container, features a satanic dinner in which the devil prepares to add a recently amputated arm to a cauldron of body parts. The devil makes yet another appearance, as a nefarious infant hovering over a sleeping Pulcinella trying to examine the face beneath the mask.

The La Scarabattola workshop is a short walk from the church, in the heart of Naples’ historic center on Via Tribunali. On a recent visit to the shop, I met Anna, the youngest Scuotto, in the back office. We sat amid a sea of papers, photographs, framed newspaper clippings, and empty packs of Marlboro Lights. Anna Scuotto is the workshop seamstress. She excused herself for talking and sewing at the same time, her thimble-covered finger moving ceaselessly at a brisk clip.

“There are thousands of Pulcinella legends,” says Salvatore. “We took characters that already exist in Neapolitan folklore and put them in situations of our own imagination.”

In the sculpture of Pulcinella crushed between the rocks, says Salvatore, the ne’er-do-well is Jesus. “Naples is sinking, collapsing and Pulcinella dies to save it,” he explains. The centerpiece of this Scuotto fantasy is a large terracotta infant, Giovannino, posed like a baby Jesus but with fingers splayed into the corne, or devil’s horns. The image, says Salvatore, is merely a mischievous homage to the role of the pagan in Neapolitan Christianity. “An old person will pray in church and then go home and touch the corno without feeling any contradiction,” says Salvatore.

But Salvatore inists the shop’s unorthodox art is not intended as a systematic rebellion against conformity. “We’re certainly not ‘in line.’ But we don’t want to educate anyone,” he says. “We took a traditional art form and twisted it so I suppose we’re rebels in that sense.”

Nor are the Scuottos exiles in their own culture. They are ultimately Neapolitan: attentive to folklore and legend and fascinated with embellishment. For Salvatore, è così: he doesn’t impose overarching meaning or presume it. “These pieces, these stories came out of us. They are in us. It isn’t strange for us to make a baby Jesus making the sign of the devil. When we were making the pieces, we did it with typical Neapolitan calm. But once the exhibit was up we saw it for what it was: devils in a church. People like the exhibit, but they’re uncomfortable too and not sure why.”

Lately, Naples itself has been in the news uncomfortably, with murders by the gangland camorra making headlines. Most of its inhabitants tend to see the city as a “casino,” (a total mess), a “bordello,” a “tarantella” (a pagan dance) — hardly reassuring portrayals. The Scuottos know this. Their art, they say, is part of an effort to resurrect the metropolis. “The fables are hope for Naples’s future,” Salvatore concludes. “We show a fighting spirit, educated and creative.”

La Scarabattola. Via Tribunali, 50, Naples. Tel./fax 081.29.17.35. You can write to them with questions. The website has no price list. Pricing is available on request.