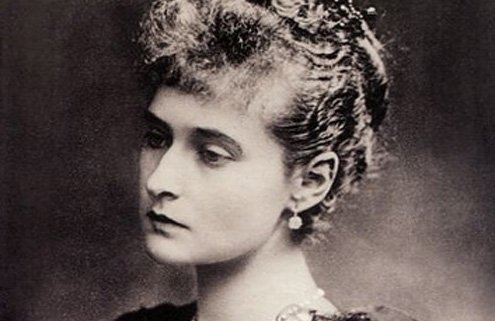 Alexandra Fyodorovna was the last empress of Russia
C

ertain quirks have followed me since childhood. For example, I’ve never been able to bring myself to kill the pesky insects that end up indoors, probably the product of reading and re-reading Charlotte’s Web as a second grader. Before wearing new clothes I insist on cutting off scratchy labels. I also have a strange affinity for names and naming, about why people are called what they’re called, starting with myself.

When my mother learned she was expecting twin girls, she bought a baby-naming book and plucked our monikers from a chapter entitled “Femmina,” ultra-romantic suggestions from Boccaccio and turn-of-the-century European royalty. Her choice — Alexandra Elizabeth — sounded rich and regal to my five-year-old self. It conjured up images of emeralds and velvet. “Fit for a Queen!” my mom used to say.

As toddlers, my sister (Francesca Laura) and I tossed aside our parents’ choices and for reasons unknown dubbed each other “Dobby.” “DOBBY!” we’d call out, our voices bouncing off the ceiling. “Hi Dobby!” we’d greet each other. My mother later read that Dobby meant friend in an African dialect, which made me feel exotic and mysterious, as if I’d lived a previous life. Maybe because my family had three children under the age of two, my name was soon shortened to Alex, a quicker and more efficient version of my birth name. By middle school, I’d become Allie.

Alexander and Alexandra were popular picks for 1989 babies (at least in my class) and tried giving my flustered homeroom teacher an alternative. “But we already have an Alex B!” she shrilled.

Over time, I experimented briefly with Ally, taking inspiration from the sitcom Ally McBeal, “y” replacing “ie.” But I felt strange about the change, as if I’d somehow betrayed the previous spelling.

My name was sometimes misunderstood. My photography teacher called me Arly for an entire semester, but I was too shy to correct her. It wasn’t just my own name I spent time pondering, but others’, too. I named my stuffed animals things like Portia and Iris, Hannah and Iman, each one chosen after many hours of meditation. If I ever had twin girls myself, they’d be named Bridget and Brandi, or maybe Molly and Mia.

Once we got dial-up Internet, I spent my time browsing the meanings and origins of my friends’ names, pleased that my hunch was correct: I was named after a past monarch. Even as an adult, the interest persists. My first question for expectant mothers is about names. I also have an embarrassing weakness for reading about and remembering even the most obscure celebrity’s child’s name, middle names included. The stories of my family members’ names intrigue me, too – my grandmother told me recently she was called Ada because a town hall official suggested it to my great grandfather, who loved it. My grandfather, meanwhile, is part of the unexplainable wave of Italian-American men named Vincenzo who go by Jimmy. My mother Lisa was named after a 1950s supermodel, while my brother was called Adam for two days before my Catholic father’s association with the creation story became too much, and it was changed to Matthew. When my childhood friend was pregnant with her second daughter, she came to me for naming advice. My proposal — Raia — was eventually chosen, and while I’ve only met the baby a handful of times, I am secretly thrilled that I’m part of her beginning, a tiny piece in the puzzle of her identity.

Today, I go by Alexandra. To me, it remains a regal, lovely name, and when I moved to Italy I figured it was my chance to finally use it. Sometimes it’s Alessandra, or even Ale. Whoever I am, I will always coax spiders into paper cups, and gently set them free.