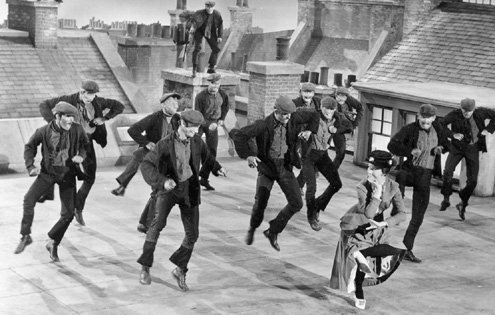 The Planet Mary Poppins is hard to dispel.
B

efore you raise a child for yourself, it’s easy to get on your high horse about how others are mishandling that sacrosanct business. In fact, even when you do have a child, it can be difficult to empathize with other parents struggling with their kids’ behavior problems. When things are going badly, no one will cut you slack, not even your own spouse, because good child-rearing is just too important.

Naturally, each misadventure you witness raises the suspicion of a long-standing, injurious pattern. But what constitutes good parenting often depends on your perspective: The Italians and Americans I know often diagnose and treat difficult moments in dramatically different ways.

My husband and myself are examples.

When my son entered his terrible twos six months early, I often thought it better to be matter-of-fact about things; to patiently (but firmly) insist. If this led to tantrums, too bad. Limits are important. My Italian husband finds that allowing such a situation to devolve into a tantrum is close to unforgivable. To him, tantrums are traumatic and reflect a lack of empathy and interpersonal skills that no child should be made to suffer. Sometimes my husband negotiates his way out of toddler tight spots — a method that puts me on edge, because it can sometimes erode into false threats, false promises or an intricate web of cajoling.

Our nanny never seems to face such dilemmas. She is Mary Poppins. She appeals to my son’s imagination, and he’s putty in her palms. Since she began, my son has lived in a magical realm where vegetables are colored with green magic markers; where prunes become ice cream and ice cream vanishes into thin air; and where getting dressed is the shortest route to the playground. She even impressed my mother-in-law, deftly inserting bites between my son’s own, tentative forkfuls, while distracting him with an amusing tale. She improvises games out of next to nothing. The other day, she tied a low string between two chairs. I found Alex engrossed in jumping over the string while she cooked up a feast and cleaned dishes. I find such multi-tasking nothing short of miraculous.

My husband and I have been doing our best to catch on. It turns out that zucchini worms are much more fun to eat than the grated variety. Broccoli trees are especially delicious when critters are evacuated from their branches. If Alex resists brushing his teeth, I tell him that I can already see the rot and offer to scrub it away. If he resists taking medicine, I tell him that it will kill the tiny bugs with terrible claws and jagged teeth in his body that are making him sick.

It occurred to me that these tales and diversions are not so far from the every day communications that define my own reality. (In the realm of facts, my understanding of how my computer works is essentially a confabulation that demystifies it just enough for me to use it. The same goes for the car, the TV, the refrigerator, radios, clocks and just about every other technological leap in the last 500 years. If someone handed me the materials, I couldn’t make a working light bulb.

News, advertising and packaging are all calculated to make me — and the rest of the world — understand up to a point and respond in a determined way.) Personal exchanges with friends or commercial contacts have a similar character: We exchange doses of varnished truths, amusing diversions, kind omissions, a smattering of white lies, and even the occasional not-so-white lie — all with a determined purpose.

People particularly skilled at colorful, amusing and flattering exchanges are charming. They have a gift of empathy and a quick imagination: gauging their audience and dishing it out, giving common ground at least as much importance as solid ground. Like most skills, it can be used for better or for worse. We just don’t call it charm when it’s used to bamboozle: We call it manipulation.

I was brought up to view all manipulative techniques, including intentional distortions and diversions, as invariably bad, a cultural Puritanism compounded by the honesty-cures-all ethos of California in the 1970s. Predictably, I tend to be sincere bordering on blunt, which is okay. I get along. But I am neither a good salesperson nor particularly skilled at personal politics. I tend not to shine at social gatherings.

In Italy, this deficit is a particular handicap. Here, nurturing the good humor of others is so important that sympathy often determines the rules and outshines the need to perform. I see this in the popularity and extraordinary success of Silvio Berlusconi, a man whose ability to generate sympathy and cement relationships has enabled him to override many of the rules that tether most public figures. I see it in Italy’s systemic recalcitrance toward firing unessential employees, even when a large company is sinking. I see it in the celebrity of reality show alumni, who manage to milk years of guest appearances out of nothing but audience affection.

Attempts to cultivate my own charms has so far yielded only small fruit: Certain street market vendors won’t cheat me anymore; and the local supermarket did bend franchise rules to help me redeem a stuffed panda bear.

I think the sympathy for sympathetic characters is also one of the reasons living in Italy feels so human, warm and inviting. People are forgiven for their trespasses. People are not equated with their achievements. Life’s little chores are full of opportunities for social interaction — obligatory niceties exchanged with shopkeepers plant the seeds of acquaintance.

The old folk tale “Puss’n Boots” is a good parable in the matter. A poor boy despairs at inheriting just a cat from his deceased parents. The cat consoles the boy offering to make his fortune if he’ll buy the cat a pair of boots. The boy spends his very last dime on a dashing outfit for the cat who charms — and fools — the king into believing that the boy is the Marquis of Carabas. The cat tricks the king into dressing the penniless boy in royal finery. The shrewd cat also devours the real Marquis of Carabas, an evil giant, after tricking him into becoming a mouse. The boy takes over the dead lord’s fiefdom and marries the king’s daughter.

When my husband and I first read this as a bedtime story to my son, my husband laughed and I was appalled. To my husband, the tale was light comedy about a clever, iconoclastic cat who makes his master’s fortune. To me, it was about the exploits of the worst sort of rule-breaker: a liar, thief and murderer. The cat is only “good” because he is loyal to the boy and his victims are unsympathetic.

I soon laughed at my grimness and my husband soon saw my point, but our initial reactions demonstrated a cultural divide in our interpretive reflexes. My ancestors come from the land where Peter is eaten by the wolf. Pinocchio’s lies just make his nose grow.

I do wonder about the values we’re instilling in Alex. He is already adept at flights of imagination and saying charming things of his own. He is neither obedient nor self-disciplined, but he is mostly well-behaved. He has a desire to please, likes playing along, and — importantly — has a precocious sense of empathy. He’s also mostly happy. Unfortunately, he is alternately deaf or overly sensitive to the word “no.” Somehow, I’ve got to teach him that “no” really does mean “no,” and that he can live with it.