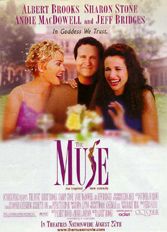 Sharon Stone is a high-maintenance delight in this Albert Brooks confection about successful Hollywood screenwriter Steven Phillips (Brooks) who thinks he’s lost his mojo and on the advice of writer friend Jack Warrick (Jeff Bridges) “hires” a muse to recharge his creative batteries. Sarah the Muse (Stone) requires coddling that includes Tiffany and elaborate salads. Phillips’ wife (Andie MacDowell) is jealous at first but gradually comes around to sarcastic Sarah, who flits indulgently into their guesthouse.

The movie runs amok in L.A. cameos, including a funny one by Martin Scorsese who tells Phillips that Sarah has inspired him to make a “Raging Bull” sequel with “a thin and angry guy.” Underneath the jokes, though, is a neat parable about creativity. The Muse does nothing in particular to help Phillips, but her distracting presence as goddess or hoax is odd enough to shake his tree. Which is sometimes all it takes. This is a curiously pleasing little movie that makes no claims to self-importance.