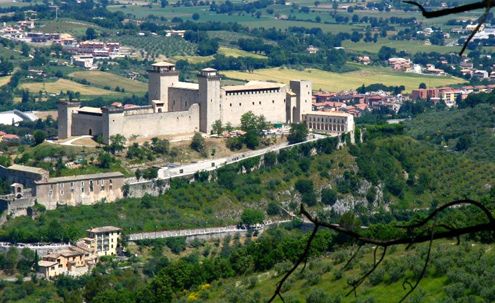 Our move to Spoleto was prompted by house prices and quality of life.
I

used to dread going to the post office near our apartment in Rome. It wasn’t so much the queues, though these were bad enough. It was the certain knowledge that by the time it came to my turn, the harpies behind the counter would find something amiss and I’d be publicly upbraided for having asked for the wrong kind of stamp, or using the wrong sized envelope. If it were a parcel, I’d have to be in the right frame of mind to face what was almost always a showdown, especially if I got the mean-faced rottweiler with the half-moon glasses. “You haven’t put the string or the seal on,” she’d shriek scornfully. But the rules seemed to change every time, and if I did put string and a seal on, she’d inevitably dismiss me and my package with a sneer: “This is a pacchetto postale. It mustn’t have string or a seal!”

So it was with no little surprise that I found myself being greeted by an elegant woman with a welcoming smile when I walked into the post office in my new home town of Spoleto the other day. She deftly took my parcel, stamped it, gave it to her assistant to make sure it left in the next post, and smiled again, wishing me a buona giornata as I went. I seized at once on this as a good omen, as I was badly in need of reassurance about the big decision we had recently made to leave Rome and live in Spoleto. In the final days, packing up our old apartment on Via Merulana, I made a mental note of all the things I wouldn’t miss, to stop myself from descending into maudlin sentimentality. Close to the top came our ill-tempered porter, who always had some complaint about an infringement of one of the many sacred rules of the condominio. Then there was the woman downstairs, who once yelled at me, entreating me to return to my own country, after I inadvertently watered the flowers in my window box out of hours.

I certainly wouldn’t miss our miniscule kitchen. That was one of the factors that clinched our resolve to move, after nearly 15 years in Rome. We couldn’t all fit around the table at the same time, and there was no prospect whatsoever of being able to buy a place big enough for our growing family. Italy’s national anti-Mafia prosecutor Pier Luigi Vigna said recently that the Chinese crime gangs were paying three times the market value of property in some Italian towns, as part of their money laundering racket. That may be true, and in the Esquilino, where I lived, a new Chinese-owned shop or restaurant opens almost every day. But I cannot believe that this is the only explanation for the frenetic rise in property prices that has gripped Rome in recent times, along with other cities such as London, Paris and Washington, D.C.

Our own decision to move to Spoleto was not only prompted by house prices. It was also an attempt to secure a better lifestyle — cleaner air, a safer environment — for our three children. They seem happy to be allowed off the leash, enjoying a degree of freedom which was impossible when we lived near a busy street in Rome, and my eldest tells me that the maze of narrow streets that lead to his new school are just like Knockturn Alley in his favorite Harry Potter book.

The safety issue seems assured by the massive presence of police in Spoleto. At first, I took it for yet another manifestation of my long-held belief that Italy has never really shaken off its fascist past. Then I discovered that the top security jail on the outskirts of Spoleto hosts some of the biggest names in the Cosa Nostra. The spin-off is that police are everywhere, people leave their keys in the door, and the drug rate is one of the lowest in the country. It’s strange how principles of civil liberties fly out of the window when you become a parent.