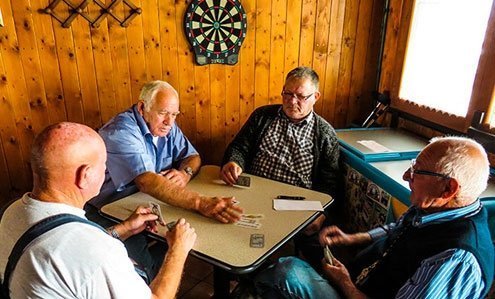 In Boscochiaro, along the Adige River, card players seen in the vein of Cézanne's famous masterpiece. Photos courtesy of Marco Bifulco's blog.
W

hen I finally catch up with Marco Bifulco he’s just checked in into his hotel room in Foligno, a city of 55,000 in central Umbria. Though its 12th-century buildings make it a colorful enough place, it’s hardly a popular tourist destination.

It’s only 5 p.m., but late November’s onrushing dusk has drained away most of the daylight. Bifulco’s working day is over. He can finally sit down, collect his thoughts, scroll through notes and pictures — and, most important, post his blog entry. He’s traveled extensively for most of the day. Extensively within a 20 miles radius, that is.

One day in college, Bifulco stumbled on a book that would change his life. It was William Least Heat-Moon’s 1982 “Blue Highways,” a one-time bestseller still regarded as an exemplary American travelogue. For three months in 1978, Least Heat-Moon (born William Trogdon, but of Native American heritage) took to America’s back roads, writing about the people he met along the way. He called the book “Blue Highways” because the standard Rand McNally atlas marked American secondary roads in blue. He wanted to capture settings and commentary that rarely if ever made it into travel literature. Studiously avoided big cities and driving a green van nicknamed “Ghost Dancing,” Least Heat-Moon met a monk, a Nevada prostitute, a log cabin restorer and a maple syrup farmer, dutifully copying down what they had to say. He chose country stores over fast food outlets and visited tiny islands off the U.S. East Coast. These many stories would later come to mesmerize young Marco Bifulco.

Naples-born Bifulco, now 41, wasn’t even 10 when Least Heat-Moon, 38 at the time, set out on his 13,000-mile Stateside road trip. But Bifulco’s back-story shares at least some kinship with that of Least Heat-Moon, who took to the road after several personal reversals. Bifulco, an economics graduate, worked as a manager in shipping firm but felt deeply dissatisfied. He disliked the impersonality of business culture. “The way [my employers] wanted me to handle people was far from my ideal,” he tells me on the phone. “I mean they tried to turn me into an asshole.”

Two years ago, he quit, an astounding move in job-scarce Italy, where employment security is seen as manna from heaven. All the more so since he had a so-called fixed job, or posto fisso, which in Italy all but ensures you have a job for life and a pension. “Resigning from a posto fisso was probably a crazy idea in the middle of an economic crisis but [the job] wasn’t me,” says Bifulco. Six months after he quit, the company folded. “That’s when I understood three things. First, stay away from mortgages whenever possible; second, we all only have one life, follow your instincts; and third, I wasn’t me who jinxed the company.”

After quitting, “Blue Highways” returned to mind and he decided to transfer Least Heat-Moon’s road trip concept to Italy, a more feasible project in the era of easy-to-update online narratives. He started the Blue Highways-themed blog StataliBlu.com, which has become his ongoing “book” as he negotiates Italy’s outland regions and towns. Like Least Heat-Moon, he’s staying away from major highways and toll roads. “I’m doing it at a snail’s pace,” he says of his travels, “which is pretty fitting in terms of the overall timing, since I remember falling for the book and feeling inspired by it. It’s only that I got around to doing the same thing 20 years later.” His blog, which contains photos and remarks about each place he visits, is appropriately subtitled: “Traveling through Italy at Zero Toll.” So far, he’s stuck to the north, driving deep into the provinces of Veneto, Emilia-Romagna and Tuscany.

Bifulco, at the wheel of a Ford Fiesta, says he’s always been fascinated by contemporary Americana. He sees his explorations of places like little-known Alfonsine, a town of 12,000 near Ravenna, as being in the spirit of Edward Hopper, the U.S. painter who, though known for his urban landscapes, composed dozens of rural-themed watercolors. Other inspiration has come from the likes of Italian minimalist, nature-loving poet Eugenio Montale, who won the 1975 Nobel Prize, and the rock band Pink Floyd, whose albums “Dark Side of the Mood” and “The Wall” dominated alternative radio air time in Bifulco’s 1980s youth.

Bifulco can’t resist the temptation of photographing local folk (one shot, of nonni sitting at an bar playing cards, is a nod to Paul Cézanne’s masterpiece, “The Card Players.”) In his blog, Bifulco seamlessly (and wittily) mixes literature and local history. He makes the mundane into the poetic, which is how critics described the prose of Least Heat-Moon. But while the American began his journey after losing his job and getting a divorce, Bifulco isn’t running from some personal downturn. “I’m at a pretty happy time of my life,” he says.

His travel partner, whether on the passenger seat or on the phone, is girlfriend Lucia. They couple is expecting their first child. “We live in Bologna, and we’re often about fantasizing about other places, dreamy places. Many such places, I’ve learned, are just around the corner. Trust me.”