The Moon and the Bonfire 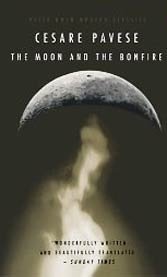 By Cesare Pavese, translated from the Italian by Louise Sinclair

he paradoxical abyss into which Pavese peers is at the same time painful and gentle. In this, his 1950 masterwork (“La luna e il Falò”), he balances nostalgia and melancholy against an impatient existentialism in which cinders ultimately burn brighter than moonlight. His narrator is an orphan and a peasant, known at home as “the eel,” who tries to quench his “rage at not being anyone” by leaving his destitute northwest Italian perch to make his fortune in prewar America, succeeding at least modestly while enduring an “ugly and temporary” life in the canneries of estranging California, only to soon realize, about America, that “the more places you see, the less you belong to any of them,” something a liaison with a tall and ambitious blonde girlfriend, ready to pose nude “astride the fire escape,” to grovel for fame, only hammers home further.

After the war he returns to his Piemonte village in search of the home sweet home America couldn’t furnish. But having hoped that “among the hills time stands still,” he finds out instead that the people of his idealized past are either dead or tapped out, only his teen buddy Nuto still around, albeit wearier, a man who now says that after the liberation everything went “from bad to worse” and that people still live as beasts, “except for the dead.”

Pavese handles his exile’s return with fierce grace, mostly avoiding the political pitfalls into which the partisan Italian authors of his day often fell. Instead, he uses bits and pieces of family history and his own pastoral memories, including his “wine and polenta” days of servitude, to elicit the mostly female scent of the 1930s and the vengefulness that followed the Fascist defeat. His bonfire burns dreams and corpses.

Particularly striking is Pavese’s rough-cut America of the imagination, based mostly on his catastrophic affair with Hollywood showgirl Constance Dowling: “Is it possible to be born and live in a country like this?” The hills to which “the eel” returns respond malignantly “blood is the same color everywhere,” as is lust, death and avarice, traits shared by hills and dales, America and Italy. Pavese committed suicide in August 1950 at age 41 not long after the Dowling affair ended.