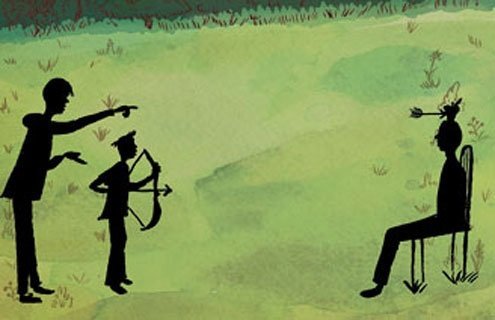 Dad, the "am-ah-zzing" babysitter, isn't necessarily the best one.
I

f I haven’t said this before, I’ll say it now (or again). Good parenting is often about listening to your instincts and then doing the opposite. We’ve all had parenting low points, special moments that test our patience and define our breaking points. Like when your four-year-old throws a Satan-infused fit or your six-year-old has a meltdown over Mario Brothers. Every fiber in your being says, “Choke him!” but instead you give yourself a big-ass ujjayi breath and say, “Do you need a hug?”

There was a moment last week when after working all day, dinner was cooking (or burning), kids were fighting (verbally and physically), laundry was hanging (all those charming photos of laundry in Italy are not charming, we have no dryers) and I was hanging by a thread. I wanted to scream, “Do you all want me to leave and never come back?”

Because I already had a British Airways boarding pass in my hot little hands (or on my iPhone) and I was leaving on a round-trip ticket home.

I was getting a much-deserved break from full frontal mommy reality. And I deserved it (and not just because I haven’t choked either one of my boys).

As Sheryl Sandberg inspires women in the workplace to “Lean in,” my own suggestion is that mothers (working in and/or outside the home) need to lean out. Unlike any career or job, parenting is 24/7. That means taking a break is essential to doing the task well.

In fact, I took my five-day trip as seriously as an obligation. I told myself I’d immerse myself in me and come back a better woman.

“Don’t think about the kids,” said my husband. “I am an ‘am-ah-zzing’ babysitter.”

“Actually, you are their father,” I corrected him — because, no matter how amazing, I don’t pay him €10 an hour to hang out with his offspring.

But I could have cared less. I had a cab waiting to take me to the airport.

The first stop in my “getaway from the kids getaway” was a four-hour layover at Heathrow (the only flight I could get). I treated it as the first stop on my “getaway from my kids getaway.” I indulged in a manicure and massage. I sidled up to the make-up counter and the sushi bar. Never mind that the Pound is as high as a kite and my U.S. greenbacks are worth a mere pittance. I was treating myself so I could return a refreshed and invigorated mother of two. I considered it serious, like job training or a work conference. As if being on a flight alone wasn’t vacation enough (I watched four films by myself — a holiday of its own).

My second and final stop was Baltimore, where I visited friends, family and the local Nordstrom. Where sale items and crab cakes soothed my soul and where freezing rain and snow couldn’t deter the temporarily independent me from soaring high. It was great.

I did check in with my kids daily via computer. They wanted very little to do with me since they were busy eating candy and playing video games. As it turns out, the “am-ah-zzing” babysitter husband has some flaws.

“How is everything going?” I asked the dad.

“Great! The house is clean. The kids are good. It’s so easy!”

My first instinct was to say, “WTF? Maybe it is easy when you let them stay in their pajamas for two days and fry their brains on Nintendo and high fructose garbage.”

My second instinct was to add, “I’ll have to deprogram them on Tuesday, wean them off of sugar, and detox them from screens. This is the price I pay for leaving town!”

Now that I’ve had a taste of freedom, I encourage all you parents out there to lean out.